Erosion Lawsuit Questions How We Should Protect The Lake Michigan Shoreline

Erosion along Lake Michigan is pitting neighbor against neighbor in Indiana. While some want to build barriers to protect their property along the lake, others want to block those efforts.

A lawsuit between two of those neighbors brings up questions about how to protect lakeshore towns and the future of the Lake Michigan shoreline.

Powerful waves hit a seawall just feet from lakefront homes in Ogden Dunes in February. More than one of these seawalls has already failed. Without more protection, these homes will likely sink into Lake Michigan.

Rodger Howell bought a house here about five years ago, when the lake levels were lower. Now he's on a town committee dedicated to protecting the shore at Ogden Dunes.

“What it’s doing is, it's been washing the sand out that we have above the wall and taking it out," he says. "So we’re in the situation where we need to do some repair up here and we’ve dealt with this before, we’re fine working on it. We know what to do.”

But right now, they’re unable to do it. The state’s new national park, Indiana Dunes, says Ogden Dunes residents shouldn't be allowed to repair or build new protective barriers within what it claims are the boundaries of the park.

That’s why the town of Ogden Dunes has joined 50 of its residents in a lawsuit against the park and the U.S. Department of Interior — as well as the Army Corps of Engineers for failing to grant them a permit.

“Basically, at our location, we've got a government-caused crisis,” Howell says.

Erosion isn’t new for Ogden Dunes — it’s been an issue for decades. Unlike communities on the east side of the lake, its beaches don’t get naturally replenished with sand. That’s because the Port of Indiana — where several big-name industrial companies make their home — juts out into the lake, blocking sand from reaching Ogden Dunes’ shore.

Howell says that’s why when the port was built in the 1960s, the Army Corps of Engineers recognized Ogden Dunes would need protection. What's more, he says, the Corps has placed very little sand directly on the town's beaches where it would be the most effective.

“So we've got this situation where we're not able to put in the stone protection that we need and we should be allowed to under our agreements,” he says.

Indiana Dunes National Park argues things like seawalls and stones only protect the homes behind them. For neighbors, they can make erosion worse.

Two years ago, most of a wheelchair accessible walkway at the Portage Lakefront and Riverwalk collapsed due to erosion — right next to where several Ogden Dunes residents have placed protective barriers.

Labovitz says the best way to make the shoreline — and buildings along the lake — resilient to erosion is to slowly retreat away from the lake over time. The park is considering moving things like stairs, boardwalks, and perhaps even the pavilion at the Portage Lakefront and Riverwalk.

That’s not a bad idea as far as Erin Argyilan is concerned. She’s a professor of geosciences at Indiana University Northwest and studies erosion in northwest Indiana. She says we tend to see high lake levels about every 30 years on Lake Michigan. The last time was in the 1980s.

“Once the disaster is over, we sort of shelve the projects and don't plan or put money towards or anticipate the next inevitable time that it will happen,” she says.

Argyilan favors putting sand on the beach compared to man-made structures like seawalls. She says it doesn’t make erosion worse for neighbors nearby because it doesn’t disrupt the flow of sand — but she understands why communities might be hesitant to do it.

She says not all sand that’s dredged out of Lake Michigan is clean enough to put on the beach — and then there’s the cost.

“You can't just set it and forget it. You have to watch it year to year. As lake levels come up, your sand may disappear — and you may be in three to five years of needing constant, ongoing, expensive nourishment,” Argyilan says.

Looking at the big picture though, she says lakeshore communities are going to have to do more to plan for the lake’s rises and falls — using mature trees and other clues along the landscape as a guide for where development could happen in the future and where it shouldn’t.

But long-term planning is unlikely to comfort Ogden Dunes residents with homes along the lake.

"I'm losing three feet a time as wave comes in, hits it," says resident Chad Hassinger. "I'm sitting there thinking. While I'm moving all the stuff off the patio, moving everything back, thinking I need to be prepared to take stuff out of the house because if it gets so far, then you could lose your home."

Tags:Lake MichiganGreat Lakesshoreline erosionclimate change
Support independent journalism today. You rely on WFYI to stay informed, and we depend on you to make our work possible. Donate to power our nonprofit reporting today. Give now.

THC products and potential cannabis decriminalization are among the topics lawmakers may study this summer. The topic selection was part of the General Assembly's one-day technical session.
Read More

A federal appeals court has declined to disturb an Indiana Supreme Court ruling, later codified into Indiana law, which declared that Lake Michigan's shoreline is — and always has been — owned by the state for the public's use.
Read More 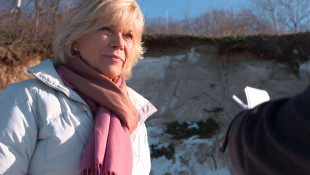 As sea levels rise, the nation's Atlantic and Pacific coastlines are eroding putting homes and businesses in jeopardy. But climate change also is increasing erosion on what's called the nation's "third coast" the Great Lakes shoreline.