On the eighth floor of Iowa Methodist Hospital in downtown Des Moines, 56-year-old Russell Braley watched daytime TV in one of the recovery units, breathing through a tube running from his nose to an oxygen unit.

"I've been in motorcycle wrecks. I've almost died several times in my lifetime. This was the scariest thing I've ever been through," Braley, a resident of Des Moines, said about his recent battle with COVID-19.

He said the virus nearly killed him.

A month ago, Braley arrived at Methodist by ambulance. He was so sick he couldn’t get out of bed.

Braley said he just hadn’t gotten around to getting the shot when he contracted the virus. 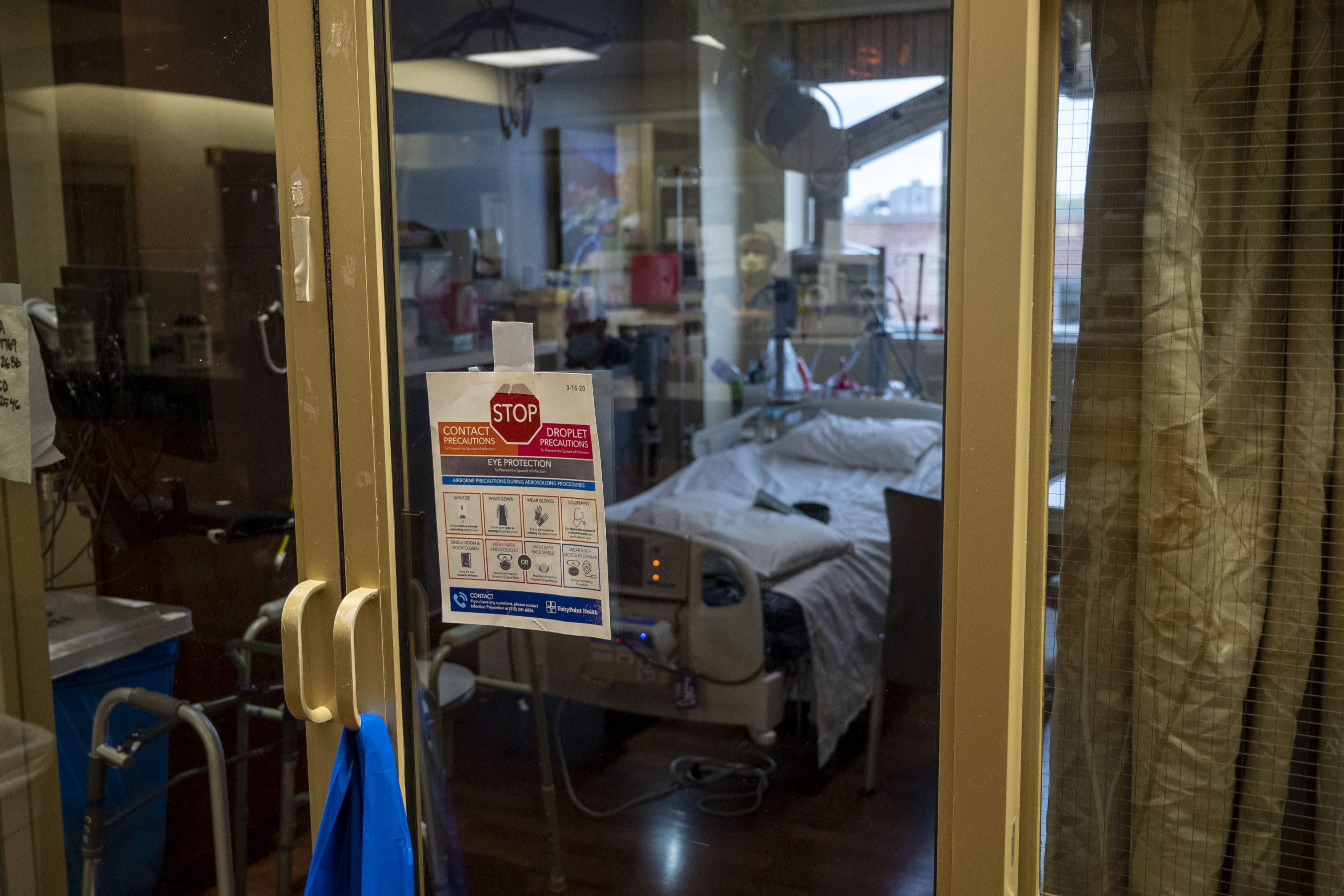 "It's like drowning above water," he said. "I mean, if you can't breathe, there's nothing else scarier."

A year and a half into the pandemic, UnityPoint Health — the system Methodist hospital is part of — no longer has designated COVID units. Instead, patients are scattered around in the different departments depending on their needs.

They lay in beds hooked up to tubes and some are on ventilators. Those under isolation precautions have the same note taped on the closed doors of their rooms, reminding staff to take extra precautions before entering.

Every day, Julie Gibbons and her team count them all. She manages infection prevention.

To Gibbons, these patients are more than numbers. 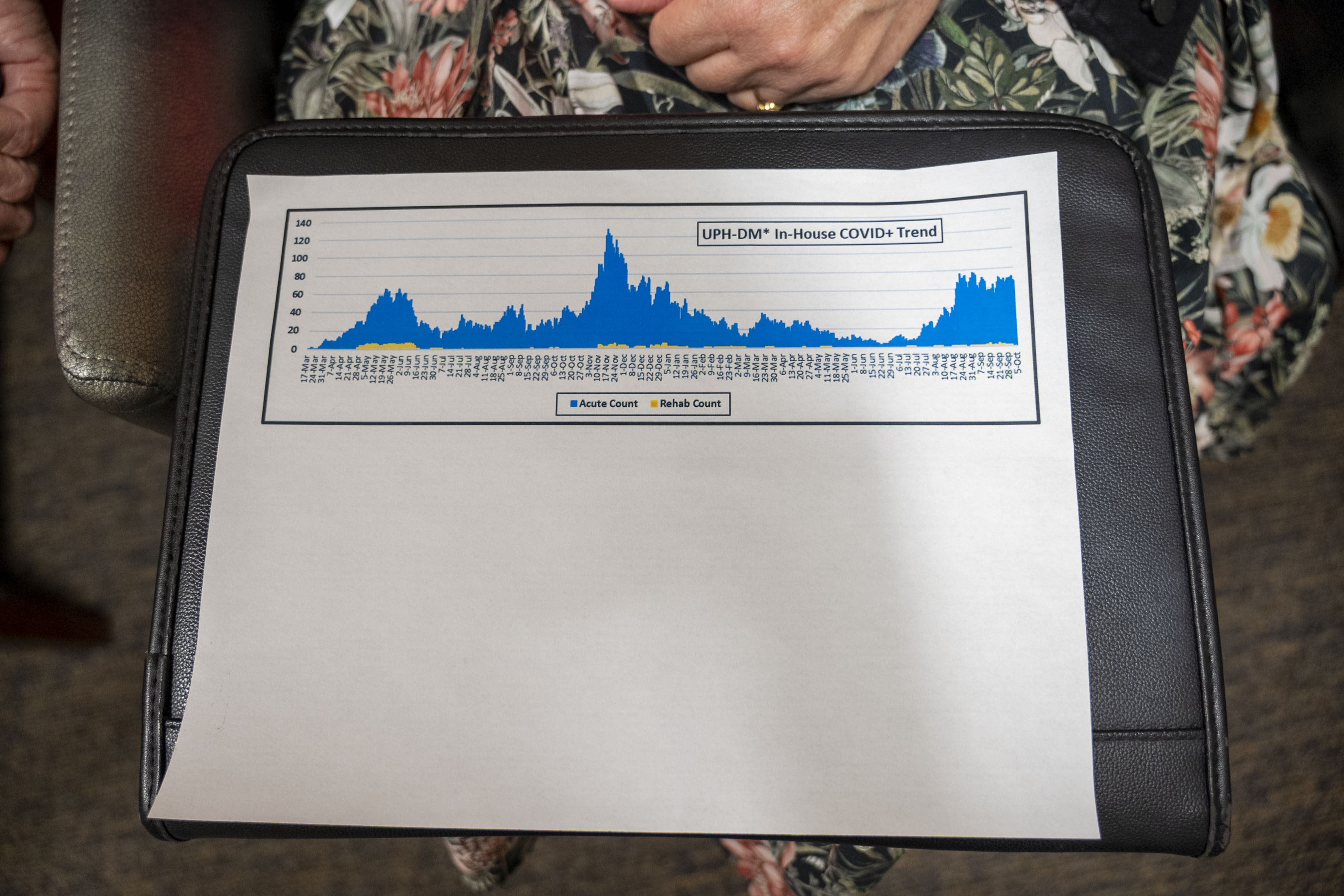 Gibbons pointed to a printed graph resting on her briefcase illustrating Des Moines UnityPoint system’s COVID case count since March of last year. It showed the spikes over time, but this one is clearly different. It’s lasting much longer.

"We've been at this high level between 65 and 77 patients for two and a half months," Gibbons said. "That's a lot of COVID patients."

On the day I visited, UnityPoint’s metro Des Moines facilities had 66 patients with active COVID cases. "Active" means patients who are still testing positive for the virus — the system’s official COVID count.

But Gibbons said, in reality, there are also about two dozen additional COVID patients who now test negative for the virus. They’re labeled as "recovered," but they’re still in the hospital, fighting its effects.

"Some of them won't ever get off the ventilator and will die even as COVID recovered because they're just — their lungs are just so damaged," she said. 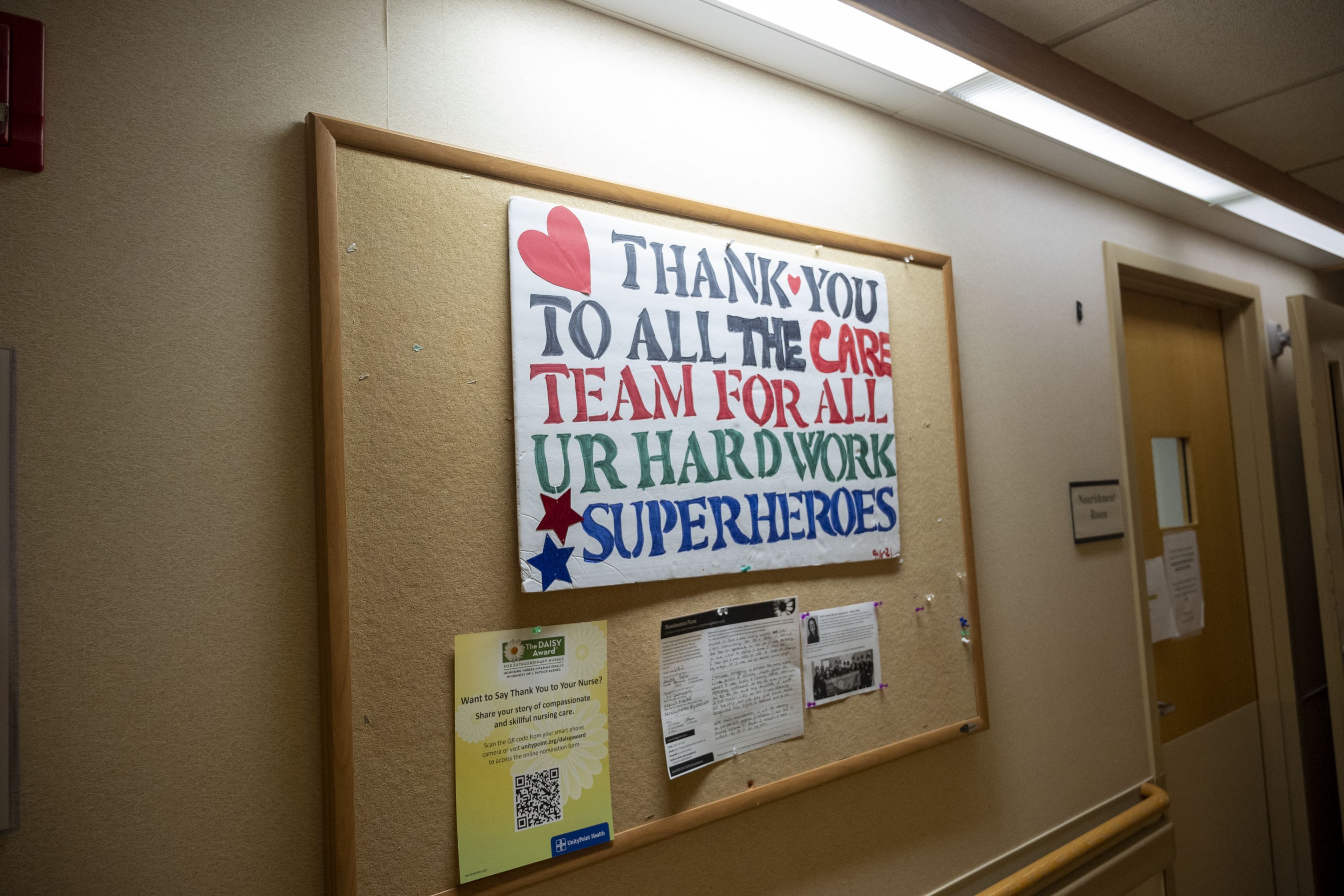 "It's frustrating, but also sad, because a lot of these folks come in, they're really sick," he said. "They're really miserable. Some of them don't make it, and we don't want that for anybody." 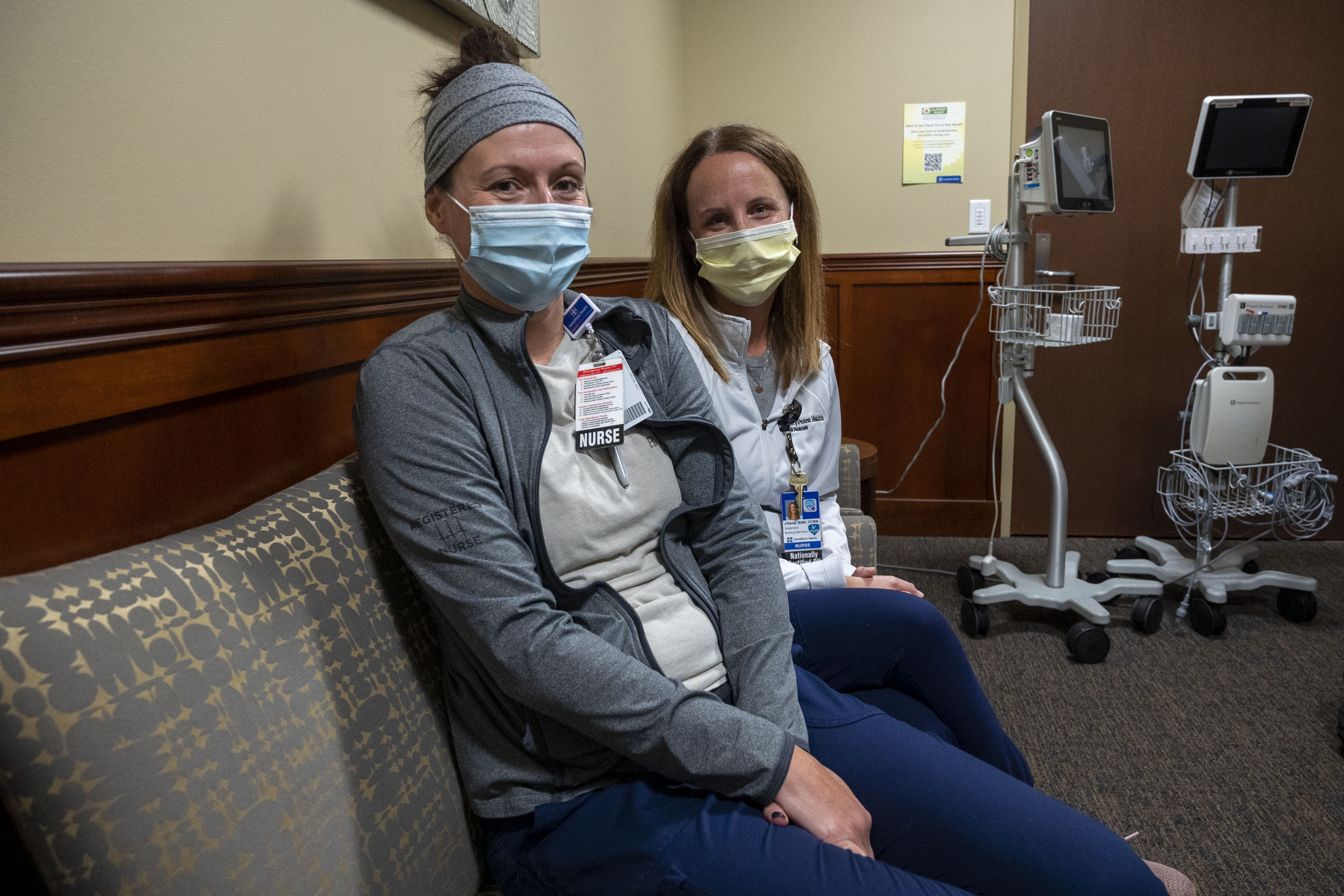 The sickest patients are in the intensive care unit where nurses like Jillana Valbracht care for them, often for weeks.

Valbracht said in her 15 years working at the hospital, she’s never seen the ICU this full.

"Every day, it seems like we're trying to get patients out of the ICU so that way we can get patients into the ICU," she said.

This kind of deep, prolonged stress is affecting all kinds of health care workers, and it’s leading to workforce shortages for many hospitals like Methodist.

Many workers who leave are vital to helping COVID patients. They’re hard to replace.

"It's taken a huge toll on our department," said Lisa Kingery, the supervisor for the respiratory care team.

She said her team sees every COVID patient in the hospital — and her team has many vacant positions right now. 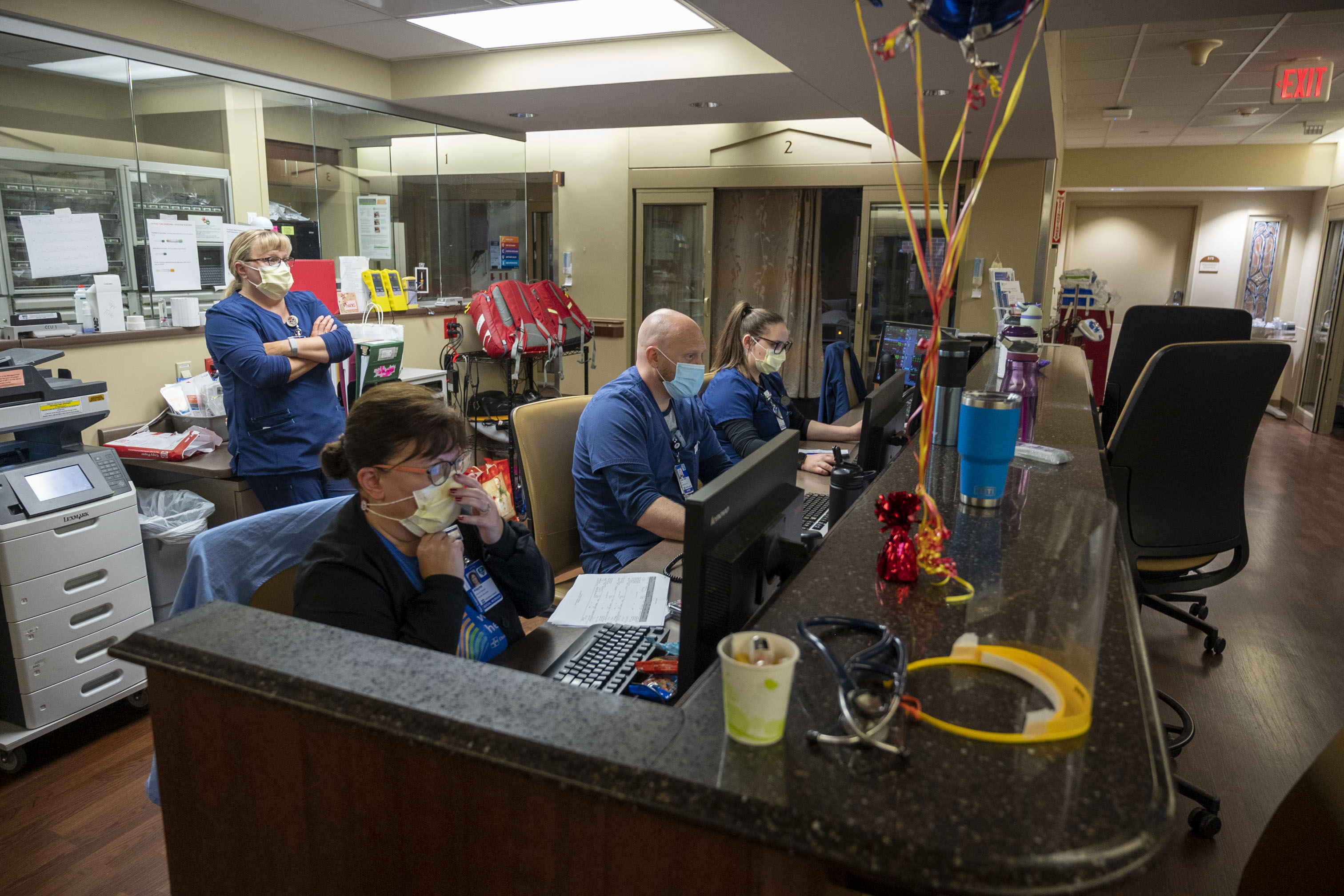 But with COVID infection rates still high - and vaccinations still lagging across the Midwest, the reality is many people will need hospitals like Methodist in the coming months.

Ali Mokdad, a professor of health metrics sciences at the University of Washington Institute of Health Metrics and Evaluation, said COVID case infection rates in the Midwest are starting to drop.

But he said that downward trend likely won't continue, and he projected cases will start to trend upwards in November.

"Simply because there are a large percentage of the population still susceptible to COVID-19," Mokdad said. "And the seasonality of winter will lead to a rise. There'll be an increase in cases and an increase in hospitalizations."

In Methodist's ER, Hawthorne said he struggles to comprehend peoples’ hesitation towards the vaccine, which has been shown to be highly effective in preventing severe illness from the virus.

"It's very rare for a physician to walk in, diagnose a condition and say, 'here's the best treatment possible. Oh you don't want that treatment, you want these other treatments that really don't work very well, and are much riskier. Why would you choose that?'" Hawthorne said. 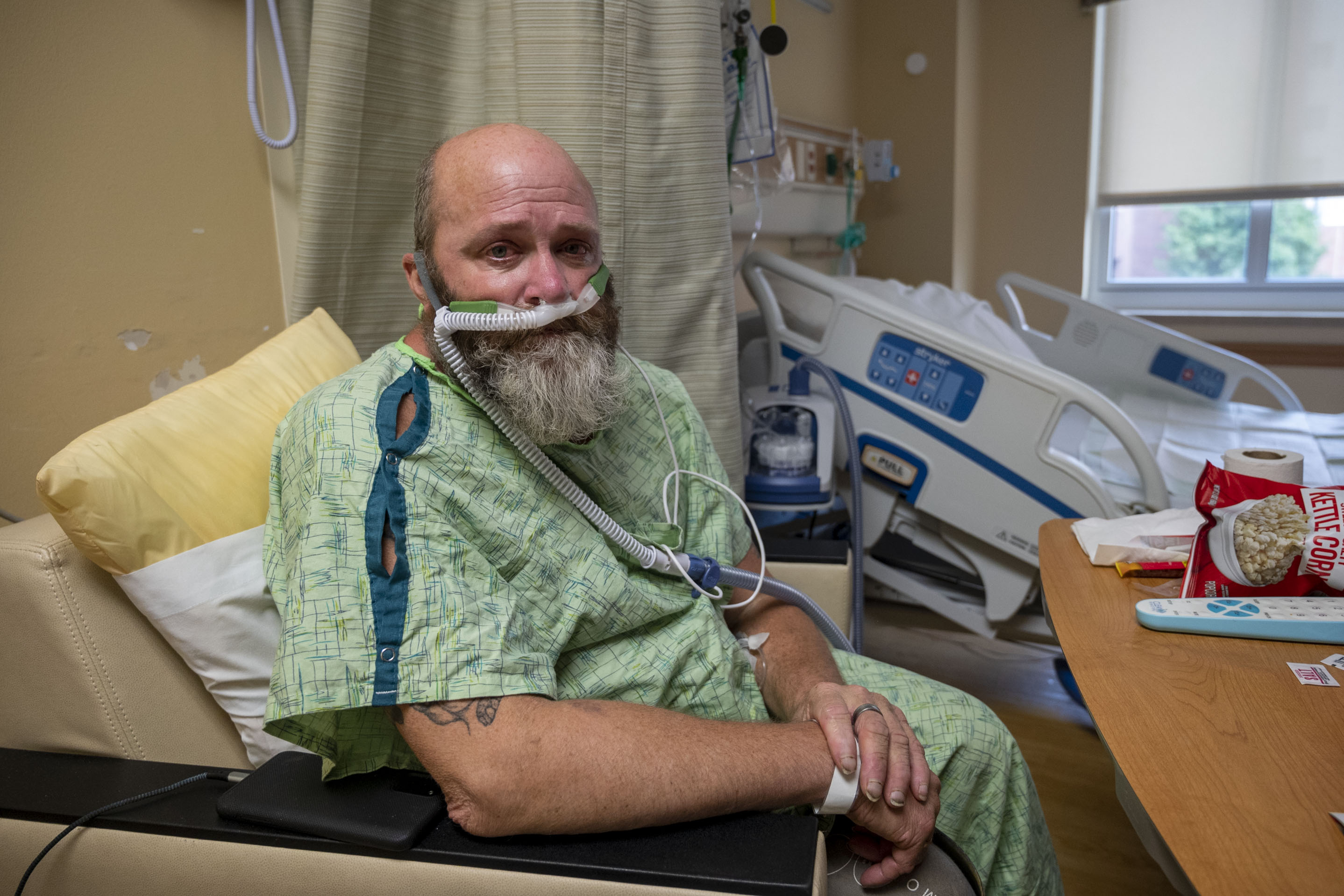 Back on the eighth floor recovery unit, 52-year-old Polk County resident Brenton Harmison wiped tears from his eyes, taking slow breaths from the tube hooked into his nose as he recounted how the hospital saved his life.

"They gave me a second chance to live again," he said. "It's pretty emotional to think I was that close to being dead. COVID ain’t no joke."

Harmison said he wants everyone to get vaccinated.

Tags:coronavirus vaccinecovid-19 pandemiccoronavirusIowahospitals
Support independent journalism today. You rely on WFYI to stay informed, and we depend on you to make our work possible. Donate to power our nonprofit reporting today. Give now. 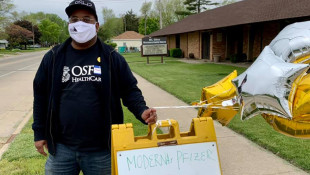 With roughly a third of the vaccine-eligible population in the U.S. still not fully vaccinated against COVID-19, public health officials have been calling on trust community voices to address hesitancy, mistrust and misinformation about the coronavirus vaccine. Keith Thomas has taken that message to heart. 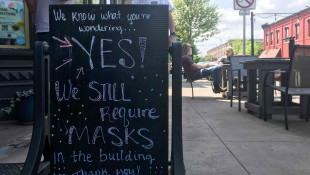 After a year and a half of the COVID-19 pandemic, public health experts believe we're still a way off from endemic — a term used for a disease that is normally seen in a population.