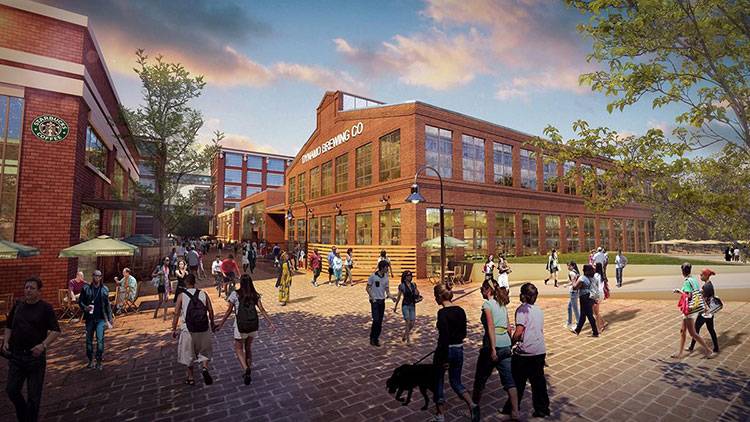 
Greater Fort Wayne Inc. announced Monday that a firm has been selected to purchase and redevelop the GE Broadway Campus in Fort Wayne. Baltimore-based Cross Street Partners has been chosen to take on the redevelopment of the campus.

Josh Parker is a partner and principal of Cross Street Partners. He says he’s been in talks with the City since December 2015, and says he was impressed with the direction Fort Wayne is heading.

“I was blown away by the investments that were already made in Fort Wayne,” said Parker. “We said, ‘shoot, this is what we try to foment in a lot of communities we go to, let’s see if we can get on board and build on that momentum.’”

Fort Wayne’s General Electric campus began production in 1911, and the company ceased all operations at the campus in January 2015. GE maintained ownership of the campus, and two months after moving out, GE demolished an office building along Broadway Street before the City of Fort Wayne expressed interest in reviving the campus for new uses.

Public forums were held throughout 2016 to open dialogue with the community on what they wanted from the campus, as the city attempted to take ownership of it from General Electric. In May, GE officially offered the campus to Fort Wayne for redevelopment.

“We’ve had a lot of people approach us about what they would do here and their interest in being part of this space, but the question always was, when do we move in, when will this occur?” said Doden. “Well, now they know we have a developer, we have plans in place, and we can begin to answer those questions.”

Fifth district councilman Geoff Paddock heard many of those same questions, as he led a task force seeking input from the community on the future of the campus throughout 2016. He says that input will likely find its way into the future development.

“The main ideas that seemed to get traction are mixed-use,” Paddock said. “We’ve got housing, we’ve got commercial, we’ve got retail, we’ve got institutional use, maybe a university or hospital or medical clinic. But all that’s to be determined.”

Mayor Tom Henry was on hand to share a few words on the announcement. He says the redevelopment would be a significant boost to downtown Fort Wayne’s momentum.

“We have to enhance the core of our city if we truly are going to remain the type of leader that we want to be,” Henry said. “We’re optimistic that this viable plan will be developed. For this site and for others in this area, it would unquestionably complement our commitment and be a point of destination in Fort Wayne.

Governor Eric Holcomb also made the trip to Fort Wayne, and praised the city for its continued commitment to enhancing Northeast Indiana’s economy.

“For more than a century, this iconic General Electric facility and the sign along Fort Wayne’s skyline was a symbol of a vibrant economy providing quality jobs and paychecks for Hoosier families,” said Holcomb.

“Today, this whole vision of revitalizing this historic GE campus is marking the next step and will become this next future symbol of economic strength and, once again, a vibrant area in our community,” he added.

The project will cost an estimated $280 million, but funding specifics for the project have yet to be determined. Paddock says he’s hopeful the redevelopment can be completed in the next three to five years.

Tags:Fort WayneGreater Fort Wayne Inc.GE Broadway CampusCross Street Partners
Support independent journalism today. You rely on WFYI to stay informed, and we depend on you to make our work possible. Donate to power our nonprofit reporting today. Give now.