Former Gov. Mitch Daniels Not Interested In Another Run

INDIANAPOLIS -- Cross one name off the list. Former Gov. Mitch Daniels says he won’t make another run at governor this year if, as it now appears, current Gov. Mike Pence leaves to seek a higher office.

Daniels had been mentioned as a leading possibility for the Republican gubernatorial ticket in the event Mike Pence became Donald Trump’s running mate. The former governor, who became president at Purdue University after his second term expired, says he was encouraged by many to run – including, he says, a majority of the Indiana Republican Party’s state committee, which is responsible for choosing a replacement candidate.

But Daniels remains committed to Purdue, saying he’s “enthusiastic” about pursuing what he calls the “exciting things” happening at the university.

Tags:Election 2016Mitch DanielsIndiana Republicans
Support independent journalism today. You rely on WFYI to stay informed, and we depend on you to make our work possible. Donate to power our nonprofit reporting today. Give now. 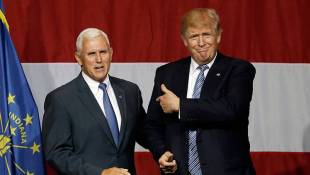