FORT WAYNE, Ind. (AP) — An art museum in Fort Wayne has received more than 200 paintings and 500 prints by an acclaimed American artist.

The Fort Wayne Museum of Art announced Monday it has been given the works by the estate of artist David Shapiro, who passed way in 2014 after a battle with cancer. The estimated $6.2 million value of the collection makes it the largest gift the museum has ever received.

The Journal Gazette reports it's unclear why Fort Wayne was chosen to receive the items, and the newspaper couldn't reach the museum curator Monday.

Shapiro's work can be found in numerous private and public collections, including the Museum of Modern Art and the Solomon Guggenheim Museum in New York.

Tags:Fort WayneFort Wayne Museum of ArtDavid Shapiro
Support independent journalism today. You rely on WFYI to stay informed, and we depend on you to make our work possible. Donate to power our nonprofit reporting today. Give now. 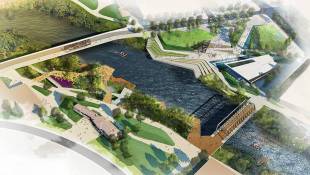 The development along the St. Marys River will include a pavilion, promenade, elevated boardwalk and concrete dock. Plans call for the project to be completed by late summer 2018.