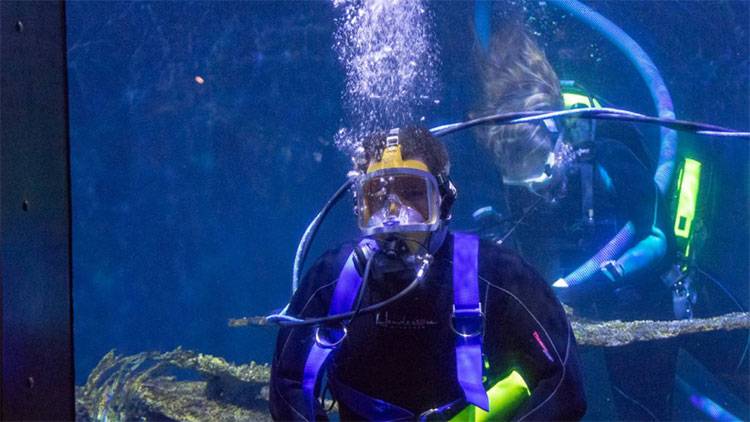 Zoo diver Tim Nix takes a break from cleaning the coral to explain the process, and how one safely swims with sharks. (Rebecca Green/WBOI)

“Tim, what are your chances of being bitten while you are actually diving in the shark exhibit?”

“Very little to none,” he says. “These sharks are more scared of us than we are of them.”

Tim is inside the shark tank, cleaning it for Fort Wayne Children’s Zoo’s grand opening for 2018 on Saturday. Beginning next week, patrons can visit the zoo and see Nix performing maintenance on the tanks every Wednesday and Thursday morning.

Nix’s clean-up sessions are popular among visitors, and it’s just one of many favorite attractions to return for the 2018 season.

The zoo’s red panda population will feature a brand new member this year, as well. His name is Justin, a six-year-old who transitioned from the Memphis Zoo. And according to zookeeper Stephanie Raiman, acclimating with nine-year-old Xiao comfortably.

“Luckily they got along,” said Raiman. “With red pandas, usually we don’t really have problems mixing. So he came and kind of walked around the exhibit and got used to his new exhibit.”

The Fort Wayne Children’s Zoo will open for its 2018 season on Saturday at 9 am.

Tags:Fort WayneFort Wayne Children's Zoo
Support independent journalism today. You rely on WFYI to stay informed, and we depend on you to make our work possible. Donate to power our nonprofit reporting today. Give now.