Forty Percent Of Rare 'Polio-Like' Cases Are In The Midwest

The Centers for Disease Control and Prevention doesn’t know why young children across the country are coming down with a rare condition called Acute Flaccid Myelitis. Many are calling AFM  a “polio-like” illness, because it causes weakness and paralysis in childrens’ arms and legs.

Doctors say the disease starts off as a common cold but the virus attacks the spinal cord. There are reports that some patients have needed breathing assistance.

State health departments have reported an increase in confirmed AFM cases in the past few months. This year the CDC has reported 62 cases in 22 states. Midwest states make up 40 percent of all confirmed cases including Illinois with 10 confirmed cases. Indiana, Missouri, Kentucky and Ohio each have one case. 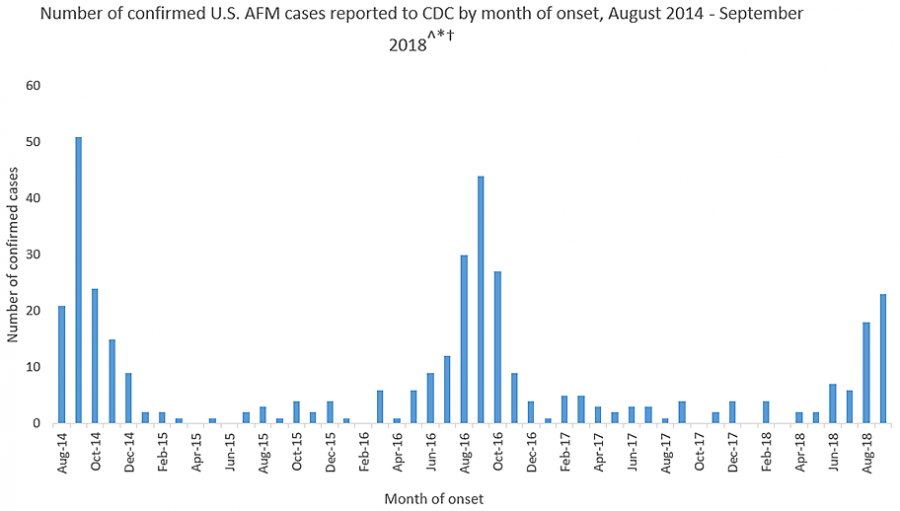 Confirmed AFM cases that CDC has been made aware of as of October 16, 2018. (The Centers for Disease Control and Prevention)

During an information briefing, the Director of CDC’s National Center for Immunization and Respiratory Diseases, Dr. Nancy Messonnier said, despite extensive laboratory testing, they don’t know what causes the arm or leg weakness and paralysis in most patients.

“I am frustrated that despite all of our efforts we haven’t been able to identify the cause of this mystery illness,” said Messonnier. “We continue to investigate to better understand the clinical picture of AFM cases, risk factors and possible causes of the increase in cases.”

Doctors and researchers don’t know how or why AFM shows up in children or why cases occur in the late summer and fall.

Dr. John Christenson is a professor of clinical pediatrics at Riley’s Children’s Health in Indianapolis. He focuses on pediatric infectious disease, and says children could be more at risk because they have a weaker immune system.

“What happens is that with time you build immunity,” said Christenson. “As an adult you’re probably less likely to have some of these symptoms due to one of these viruses, than if you were a young child.”

The CDC has a hunch that AFM can be caused by other viruses like enterovirus or west nile virus. Environmental toxins or a condition where the body’s immune system attacks and destroys body tissue, could also be factors.

Christenson understands why parents are concerned and he says prevention is key.

“We don’t have a vaccine. But for other viruses, other types of bacteria that can cause an illness very similar to this, we do have ways of preventing them. Everybody should have a flu shot,” said Christenson.

The CDC reports the odds of contracting AFM are less than one in a million. There are 155 cases under investigation nationwide.

Parents should seek medical care right away if a child develops symptoms of AFM, which include sudden weakness and loss of muscle tone in the arms or legs. Parents can also help protect their children by encouraging hand washing, staying up to date on recommended vaccines and using insect repellent to prevent mosquito bites.

Tags:Centers for Disease ControlAcute Flaccid Myelitis
Support independent journalism today. You rely on WFYI to stay informed, and we depend on you to make our work possible. Donate to power our nonprofit reporting today. Give now.