Excited and hungry, three children chant as food is served (“We want potatoes! Potatoes!) and ask what else is for dinner (fish and green beans as it happens). The hubbub continues until Mom cracks down:

“Please! Sit. On your bottom.” The children obey. They continue to buzz as they eat.

Dinner at the Zielinski home is the normal, frenzied scene you’d expect in a house with three kids under the age of four. But their mother, Stephanie Zielinski didn’t come to motherhood in the typical way. She’s a foster parent. Zielinski took in her first child in 2012, when she was 27 years old and in a PhD program. As a pediatric nurse practitioner, Zielinski is a skilled caregiver and most of the eight kids she’s taken in were medically fragile.

Zielinski’s four-year-old daughter Nya was severely undernourished when came to Zielinski. (She adopted her and her younger sister last summer.) Nya was also severely developmentally delayed. She wouldn’t smile or connect with any adult.

Our foster parents, they are the therapy that we offer these kids.

Kids often go into foster care because of problems at home like addiction, domestic violence, physical abuse, or neglect. They usually carry trauma from these painful experiences. This can have lifelong consequences on both physical and mental health, and can make them challenging to parent. But, experts say, it’s loving foster parenting that can do the most to help them heal.

“Our foster parents, they are the therapy that we offer these kids,” says Moira Szilagyi, who leads the Council on Foster Care, Adoption, & Kinship Care for the American Academy of Pediatrics. Szilagyi points out that kids in foster care have all suffered trauma--at the very least from the loss of the original home that they know.

“We can give them mental health supports, give them pediatric supports, we can give them case work support,” she says. “It is the foster parent, or the kin parent, with that skill set who really helps these children to heal.”

In 2014—the most recent year for which  data is available—a total 650, 000 kids spent at least part of the year in foster care. And in most places, there are not enough qualified foster parents to take them all in. About 21 percent of kids in the system are not in long term family placements.

Nya was one of the lucky ones. Zielinski made sure Nya saw all the medical specialists she needed, including occupational therapy, speech therapy and breathing and vision specialists—over 80 hours of appointments in her first year and a half in foster care. Zielinski also tried to give her an intense experience of bonding, keeping her close, strapped to her body with a baby sling.

“When I was home, whether I was making dinner or doing laundry, I was wearing her. Or holding her or interacting with her,” she explains.

Szilagyi says trauma is one of the biggest threats to the long-term physical and mental health of kids in the system. And trauma most frequently shows up in a child’s behavior. Parents may not even realize that’s what they’re dealing with.

“Nobody presents [in the pediatrician’s office] saying my child is traumatized,” she says. “They come in with complaints of sleep issues, aggression...They come in with, ‘he's inattentive, hyperactive, distractible.’”

Parenting children with trauma can take extra care and awareness. In Zielinski’s case, she’s learned to provide intense patience, consistency, and loving discipline. Those may sound like normal aspects of parenting, but “it’s kind of like normal on steroids,” Zielinski says. “That one-on-one attention that bonding, that consistency, safety, security is all these kids need. Doing that extra diligently is so important.”

Zielinski’s hard work has paid off. Nya’s grown into a healthy four-year-old. She’s testing in the normal range in almost areas of development like speech and motor skills.

“She’s really such a miracle child in so many ways,” Zielinski says. “She’s a great testament to showing that even kids that come from these difficult situations with the right services they really can do incredibly well.”

After finishing dinner, Nya flips through a picture album. Nya points to her nebulizer in one photo, that she used for a lung condition. In another she asks about a little boy, another child her mother fostered for a time, “Mommy, why does he have a band-aid there?” “Because that’s where his g-tube was, honey,” responds Zielinski, describing a feeding tube that delivered nutrition through the abdomen.

Zielinski adopted Nya and her sister this summer, and she just found out that she’ll be able to adopt the infant boy in her care by the end of this year.

It can be painful at times, caring for children only to see them go. “It’s not something you can prepare for,” she says. “It's just something that you know you kind of except as a foster parent and you work through.”

Even after adoption, her children still need extra care. 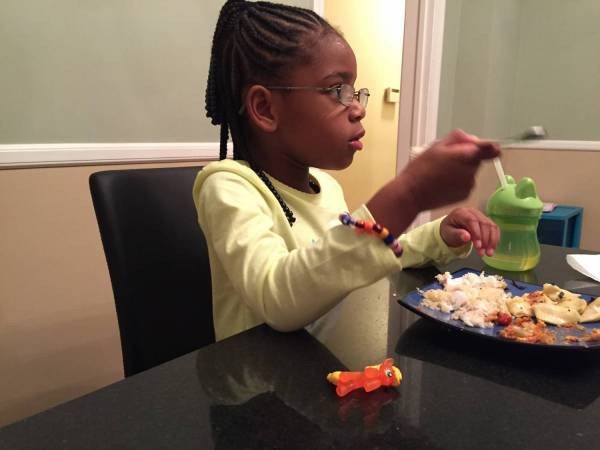 Tags:mental healthchildren's mental healthfoster carefoster childrenfoster parents
Support independent journalism today. You rely on WFYI to stay informed, and we depend on you to make our work possible. Donate to power our nonprofit reporting today. Give now.