INDIANAPOLIS (AP) — The navigation system advises taking a right on Meridian at Monument Circle in downtown Indianapolis. But there is no Meridian Street and so round and round you go past the memorial for soldiers and sailors until you realize Meridian has been replaced by Dixon Drive.

All downtown Indianapolis streets have been renamed, in fact, for each of the 33 drivers in the Indianapolis 500. Residents across the city have been counting down to Sunday's race for weeks and many enthusiastically entered the “Spectacle of Homes” contest meant to spark civic pride. 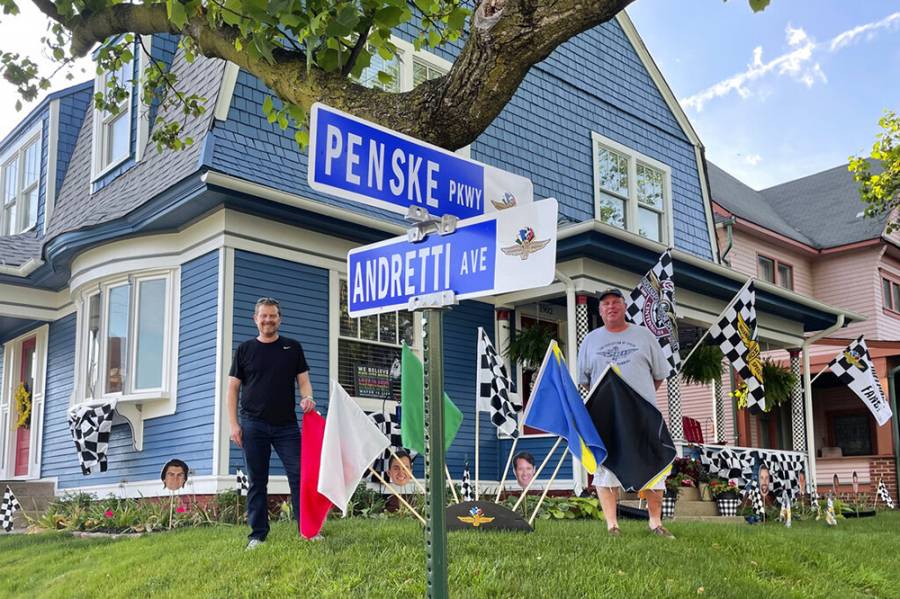 There is no sporting event in the world embraced by its community the way Indianapolis supports “The Greatest Spectacle in Racing," a 105-year old slice of Midwestern Americana that has connected generations of families through wars, the Depression and now a pandemic.

Indianapolis Motor Speedway was closed last year to spectators for the first time in 104 runnings so drivers made surprise visits to longtime season ticket holders who had their race-day streaks broken because of the pandemic. With the traditional pre-race parade canceled for a second consecutive year, IMS asked its fans to decorate their houses for a chance to be featured on a parade route.

More than 700 homes entered and the final field of 33 — it was the biggest bump day ever — were selected as winners. Drivers will make pit stops at the homes on Saturday.

For a second straight year, it's back to the homes again in Indiana.

The fans worked hard. Some went to their local tire shops to grab a used wheel, spray paint it gold and attach it to their roof in honor of the wing-and-wheel logo. Others wrapped checkered flag print around their front porch columns. Sunflowers sprouted from Indy 500 souvenir plastic cups. Indy 500 milk bottles and beer bottles lined front yards. One set of neighbors lined their street with mini checkered flags to stake the adult tricycle race that goes off with the same fervor of the field at IMS. 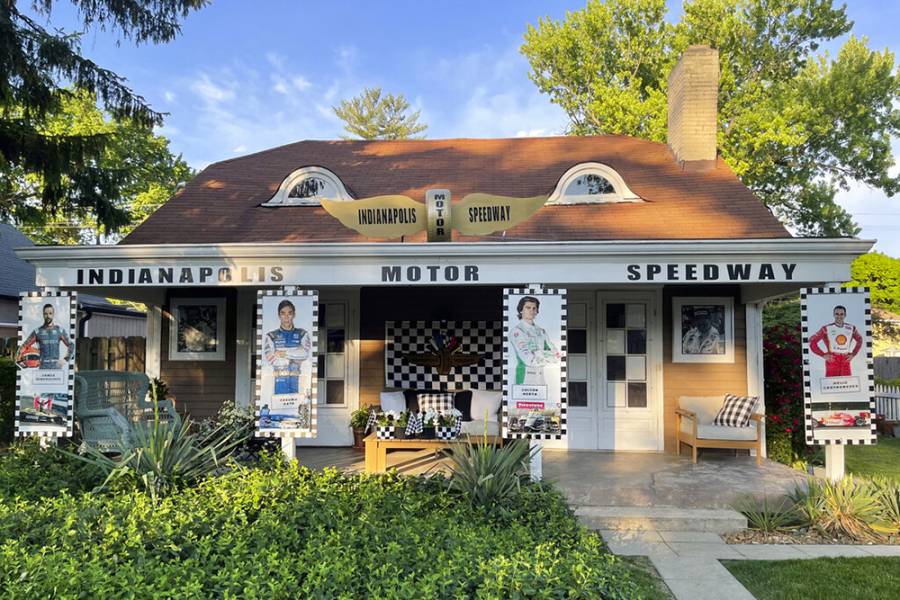 Some even had a true yard of bricks — a lined path in the yard leading to porch parties on warm Memorial Day weekend evenings.

Jameson and Kimmy Terzini clipped on a mannequin of favorite driver Helio Castroneves scaling their front porch in victory — a precursor to what they hope is a history-tying fourth fence-climbing victory Sunday.

Terzini has attended the 500 for 25 years, in the same seats for 12, and considered buying fake yellow shirts last year to sneak into the speedway as a volunteer when it was closed to spectators. He will be back in his seats Sunday but still wanted to participate in the “Spectacle of Homes.”

“We value our relationship with the community and engaging with the people of our neighborhood and we're big Helio fans and are hoping this year he goes for his fourth,” Terzini said.

When Castroneves saw the photo of the Terzini's house on Thursday the three-time winner desperately hoped the speedway sent him there during the parade.

“That is special and shows how dedicated they are to putting their energy and positivity into the fans coming back,” Castroneves said.

In downtown Speedway, right next door to the house where both Marco and Mario Andretti surprised a ticket holder last year, Veronica and Beth Shook went with an Indiana dairy theme for their decorations. They placed inflatable cows, milk bottles — most race winners drink milk, remember — and bunting all over the property and turned their front walk into their own “Yard of Bricks.” 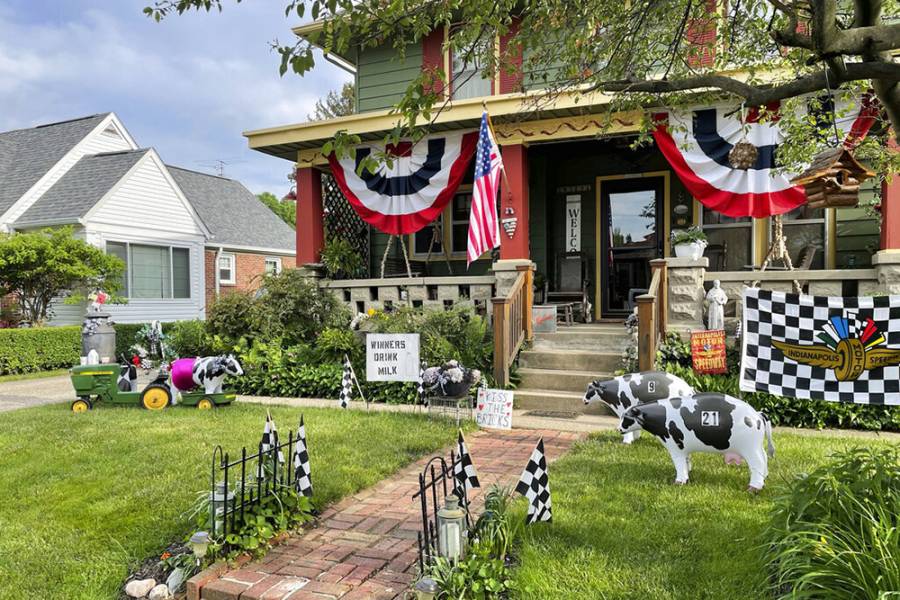 Beth Shook's parents decades ago rented rooms to young drivers and mechanics during the month of May as teams prepared for the race. Her daughter, Veronica, wanted to decorate their home to give neighborhood children a sense of normalcy this year. The speedway will be open to 135,000 fans on Sunday, roughly 40% capacity, and although it will be the largest sporting event in the world since the start of the pandemic, it still isn't a true Indy 500.

Ed Carpenter, a longtime Indy resident and three-time Indy 500 pole winner, was waiting out a rain delay at a youth baseball game earlier this week listening to other parents make their race day plans.

“It's part of what makes this race so special,” Carpenter said. “I was standing there with some parents under a pavilion and they didn't know I was standing there and I was listening to them talk about their race day plans and getting their kids pumped up because it's race week.”

Eric Otto's 50th birthday was ruined a year ago when he couldn't attend the Indy 500 for the first time in years. He lives at the corner of New Jersey and 19th, which is renamed Penske Parkway and Andretti Avenue each May, and decorated his house this week for his birthday celebration.

His brother, Chris, flew in from Seattle, and 29 friends will attend the Indy 500 on Sunday. Until then, the brothers were busy hanging flags all over the porch and planting fatheads of drivers in the field all over their lawn. The collection even included IMS Track President Doug Boles. There was even a wreath made by the same florist who crafts the winner's handmade arrangement.

“This place has been around since 1911, it put Indiana on the spotlight around the world,” said veteran driver Tony Kanaan, 2013 Indy 500 winner and longtime Indy resident. "Every race car driver on earth wants to be part of this. Look at me, I mean, I’m a foreigner. I came from Brazil. I lived the American dream. My kids are American. My wife is American. I became an American citizen six years ago. This place is just magical.”

Tags:IndianapolisIndianapolis 500Indianapolis Motor Speedway
Support independent journalism today. You rely on WFYI to stay informed, and we depend on you to make our work possible. Donate to power our nonprofit reporting today. Give now. 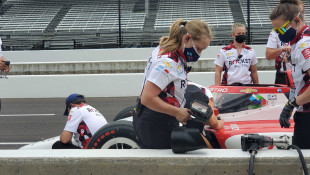 Majority-Women Team To Make History At This Year's Indianapolis 500, Part Of Broader Effort

For the first time, a majority-women's team is competing in the Indy 500 this weekend. The team is a part of a broader effort to bring more diversity to motor sports. Only nine women and only two Black drivers have ever competed in the so-called "Greatest Spectacle in Racing." 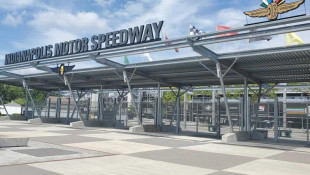 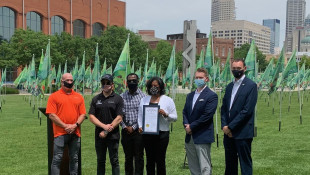 The new exhibit kicks off the Indy 500 weekend and supports food security in Indianapolis.