GOP Candidates for US Senate Begin Defining Themselves At First Debate

Regardless of the questions asked, the answers from each candidate followed a theme. Holcomb focused on his record in state government, displayed in an answer to a question about replacing the Affordable Care Act, in which Holcomb cites helping create the Healthy Indiana Plan.

“I was in the trenches with (former governor) Mitch Daniels when we brought forward HIP; we were way ahead of the curve. We need not look very much further than what we’re able to do here in the state of Indiana,” he said.

In response to the same questions, Stutzman, who represents Indiana's Third Congressional District, criticized President Obama for what he calls a broken Washington, and even fellow Republicans in Congress.

“I have not always been the darling of the establishment in Washington, D.C. and the Republican Party," Stutzman said, "because I’m going to fight for people, not for special interests.”

In his time, 9th District congressman Young reminded the Kokomo audience that he beat the likely Democratic nominee for Senate, Baron Hill, in a 2010 congressional race.

“I think all of you will want to focus on a record of conservative accomplishment and so forth. You will not, of course, see that from Baron Hill, which is the most important focus," Young said. We need to make sure we hold onto this U.S. Senate seat.”

The three candidates are vying for the nomination to replace retiring Republican Sen. Dan Coats.

Tags:Election 2016Todd YoungU.S. SenateEric HolcombMarlin StutzmanDan Coats
Support independent journalism today. You rely on WFYI to stay informed, and we depend on you to make our work possible. Donate to power our nonprofit reporting today. Give now. 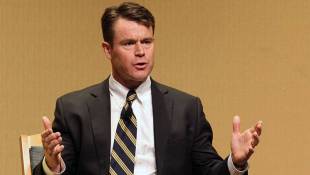 From October to December, Young raised $749,163 - the second-highest total ever for a non-incumbent senator in Indiana for an off-year, according to Young's campaign manager, Trevor Foughty.