Republican legislative leaders say it’s “critically important” that Gov. Eric Holcomb support their charge to raise taxes for road funding. That comes ahead of Holcomb’s State of the State address.

“We need to convince the taxpayer and convince the people that are going to vote here in the building that we’ve been through every other avenue of how you deal with this,” Kenley says.

House Speaker Brian Bosma (R-Indianapolis) agrees and says it’s important that Holcomb is on board.

“It’s difficult to step forward and say ‘We’re as lean as we can get here and we have to have an investment in roads and we’re willing to put a gas tax [increase] on the table,’” Bosma says.

Bosma says he’s hoping to hear more specifics from Holcomb when he delivers his State of the State address.

Tags:Eric HolcombBrian BosmaLuke Kenleytaxesfuel taxroad funding2017 legislative session
Support independent journalism today. You rely on WFYI to stay informed, and we depend on you to make our work possible. Donate to power our nonprofit reporting today. Give now. 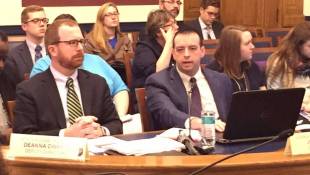 The Holcomb administration's proposed budget, as presented to lawmakers, contains only a modest increase in education spending.