Getting to Anne Polston’s house is a journey: first, you have to get to Liberty, a town about two hours southeast of Louisville. Then, there’s a winding eight-mile road that’s largely one-lane, and sometimes just gravel.

At the end is Polston’s three-bedroom home: crammed with toys and VHS tapes and beaten-up furniture. The messiness bothers Polston, who likes things orderly. But there’s not much she can do about it – not with four kids in the house.

“As the saying goes, grandparents can spoil them and send them home? Well, we don’t have that option,” she said. “Unless we want to put them in a foster home. And that’s not an option for us. We don’t want it.”

But watching over four kids is taking a toll.

“We’re not spring chickens anymore,” Polston said. “We can’t keep running after them all the time.”

The kids were born to Polston’s stepdaughter. Polston and her husband gained custody rights because the parents had drug-related issues. One of the children was born with neonatal abstinence syndrome – a dependence on opioids – which can result in developmental delays.

Polston’s situation is not uncommon across Kentucky. In 2017, some 63,000 children were in the care of grandparents; that’s 6% of kids statewide. And of those grandparents, 38% were age 60 or older.
In Casey County and the nine counties around it, 7% of children there are being raised by grandparents, which is slightly higher than the state average. That’s according to U.S. Census data between 2013 and 2017.
A great number of these cases arise from issues related to the opioid epidemic: incarceration, abuse or neglect. This can put a grandparent in a difficult situation – especially in a state where many people live in poverty and have big health issues.

There’s mixed research on how raising kids affects a grandparent, according to Bert Hayslip, a professor at the University of North Texas. On one hand, grandparents might have to work longer and make decisions on the fly, improving cognition. There’s also a significant downside.

”Many grandparents seem to put their own needs behind those of the grandchildren,” Hayslip said. “This includes medical, and for that matter, emotional needs.”

John Fulton, a psychologist, sees the impact at an outpatient mental health center at the Casey County Hospital in Liberty.

“They usually come in with complaints of depression or stress,” Fulton said. “They come in, some of them, feeling guilty, because they’re aggravated at having to do this.”

There are other problems, too. Polston has two slipped discs in her back from working at the post office.

“It gets to my back,” said Polston. She noted that 2-year-old Sissy, like any other toddler, often wants to be picked up. “She’s gaining weight continuously, and so when she wants me to pick her up, it really hurts.”

In addition to that physical challenge, money is tight. Polston’s husband works as a cattle driver, but it’s weather-dependent. Last year, the couple’s income was $27,000, she said.

Until 2013, a Kentucky program gave these relative-caregivers $300 a month for each child. That program was discontinued because of cost.

Child advocacy experts say that since that program went away, the state hasn’t always told grandparents about other available resources – daycare assistance, a smaller amount of money, among others.

Which is why Polston and her friend Clydeen Campbell formed the Alternative Parents Action Council. It’s a support group that also educates relative-caregivers about state benefits.

“When social services gives you these children, they don’t explain to you how to get the benefits or what you have to do,” Campbell said.

Campbell is raising four of her sister’s grandchildren, because the parents have drug-related issues. She’s 58 and married, but her husband has a disability and can’t help with the kids much.

“I mean, I love the children, I love them – but it’s really hard,” Campbell said. “At my age, I tell everybody all the time, I don’t remember being a mother being this hard.”

State officials are rolling out more targeted programs to support these grandparents and other caregivers.

Social workers will have to tell relatives about the benefits, said Elizabeth Caywood, deputy commissioner at the Kentucky Department for Community Based Services. They include health insurance for the children, food stamps, financial aid, daycare assistance and a one-time payment when a child is placed with a grandparent.

“There's going to be a full disclosure process of the different custodial options as well as corresponding service and benefit options and policy options for the child,” Caywood said.

The state is also working on what’s called a "child-specific" foster care program – for children who have a relative or community member who wants to foster them. The process, the state says, will be less rigorous than the traditional foster care system. That program provides $700 a month per child.

But Terry Brooks, executive director of Kentucky Youth Advocates, said the state isn’t going far enough. There are more things the state could do, like training for caregivers on how going through trauma can influence a child's behavior, and how grandparents can help a kid cope and also manage their own stress.

“The state needs to take a much stronger and more consistent commitment to providing supports, like training, and like respite care, than currently is being done,” Brooks said.

He said respite care – basically someone to watch the kids like a babysitter – could help people like Caldwell. Parenting four kids is nonstop.

“My, my big vacation for this year was spending a weekend in Harrodsburg,” a town about 45 minutes from Liberty, Campbell said. “So I got away from the kids for two days. Still, I got to rest for a couple days.”

For now, Polston and Campbell hope members of the Alternative Parents Action Council can offer babysitting for each other – so they can rest up and go back again to the nonstop parenting.

“My husband's ex-wife passed away in November, and she was taking the older boys at one point, but now I don't have that,” Polston said. “That's what we were hoping with this group, once we start getting really know each other so we have a little bit of that respite care.”

Tags:agingopioid epidemicrural healthcarechild care
Support independent journalism today. You rely on WFYI to stay informed, and we depend on you to make our work possible. Donate to power our nonprofit reporting today. Give now. 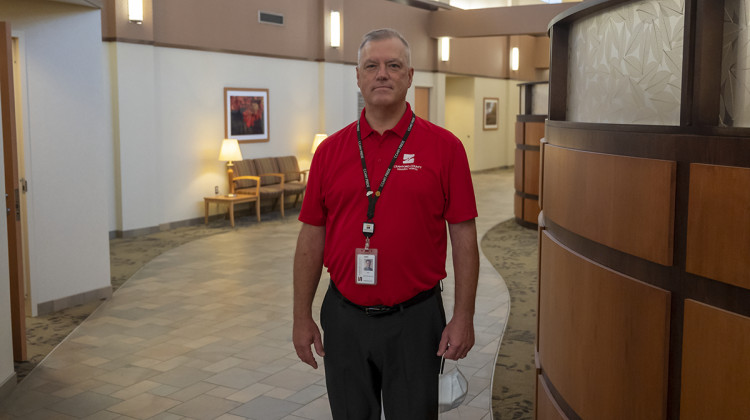 A new federal designation would allow struggling hospitals to end inpatient services, but some have concerns about how that could affect rural health care.
Read More