Grassroots Bus Service Brings Healing Touch To Inmates And FamiliesA report from 2005 found, on average, adults are housed in prison more than 100 miles from their families. This makes it hard for families to visit loved ones.url2017-10-04T00:00:00-04:002017-10-04T00:00:00-04:00
Unable to load the audio player.
You could try direct download?
playpausemuteunmute
Original story from   WFYI-FM 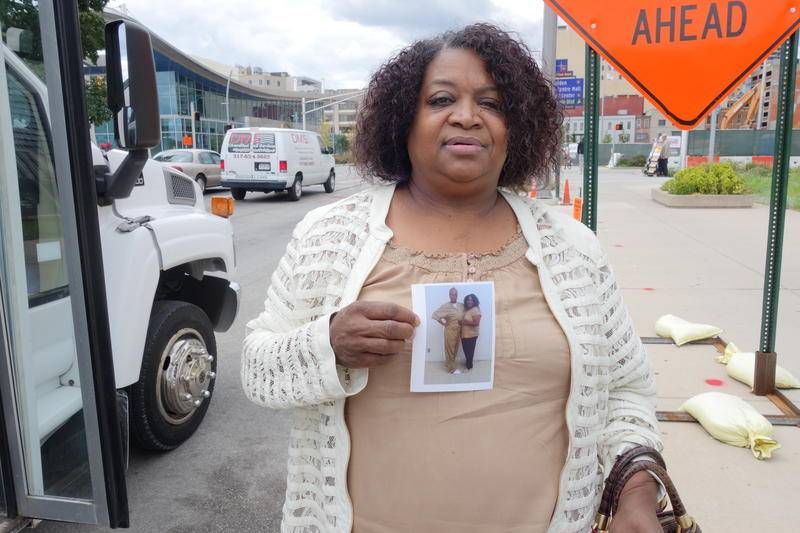 Janice McClain poses beside the Use What You've Got Prison Ministry bus, which connects people with their incarcerated family members. Photo: Emily Forman/Side Effects Public Media

Janice McClain climbed aboard the van at a stop in downtown Indianapolis and took a seat among a dozen or so other travelers on a recent September day. They were all women and were all on their way to visit children, spouses and fiancés in prison.

Janice has been catching a ride for more than ten years to visit 35-year-old Edward Hobson, who goes by Pearyl. Janice calls Pearyl her “knee baby,” remembering the child glued to her knee as a toddler. (Though Pearyl identifies as transgender, Janice speaks of Pearyl as her “son” and uses male pronouns.)

Sixteen years ago, Pearyl went to prison for murder. Back then, Janice struggled to stay in contact and her health suffered. “I mean, I passed out the day of his trial,” she recalled. “I just passed out on the floor.” She said she’s been sick ever since.

Cecelia Whitfield, owner of the bus, lead the women in prayer. “The only reason I’m still here is because of prayer,” she said before she began.

The women echoed her sentiment: “Amen.”

Since 1988, Whitfield has given thousands of families rides to prisons across Indiana through her prison ministry, called Use What You’ve Got.

It’s a bus service that helps families in Indianapolis stay connected. Research shows when someone goes to prison, the health of their family members at home can suffer. But many families don’t have cars or an easy way to get to prison. Whitfield’s bus tries to fill the gap.

It all started while Whitfield was visiting her son, who was incarcerated. On those trips she met many families needing rides. Several years later, she bought a school bus on layaway and painted it purple and white. Whitfield took out a mortgage on her home, and used that to pay off the bus and get insurance. She named her prison ministry after her mother’s favorite saying: Use What You’ve Got.

Now, Use What You’ve Got Prison Ministry has two 15-passenger vans. They travel to 16 prisons, plus juvenile detention centers around the state.

Whitfield and her driver Linda talk about the importance of the touch a lot.

“The one health thing for the people in the prison is the importance of the touch and the hug,” she said.

She pulled up a message Linda recently shared with her on Facebook.

“Researchers have discovered something fantastic. When a hug lasts 20 seconds, there is a therapeutic effect on the body and mind,” Whitfield read. The post continued to list the benefits of hugs, “to calm our fears and anxiety,” said Whitfield.

There’s science that supports this Facebook post. Studies show that hugging can protect people from stress-related illness. But if your loved ones are far away in prison, lack of affectionate touch can be a health hazard.

The Ella Baker Center For Human Rights, a human rights organization in Oakland, California, led a 2015 survey of formerly incarcerated people and family members affected by incarceration in communities across 14 states to learn about the financial and physical health effects.

“One of the things we found was individuals reporting regular contact with their family members were less likely to report negative health outcomes associated with incarceration,” said Zachary Norris, executive director of the Ella Baker Center. And those surveyed reported numerous health consequences including depression, anxiety and post traumatic stress disorder.

Norris said when families can’t stay in touch, “it can be extremely stressful and extremely frustrating and really denies people what makes them human, which is family connection.”

During her first visit, the prison turned her away. She said she cried for nearly three hours, “crying and praying,” until they let her in.

Pearyl isn’t the first child Janice lost. Her two older sons died — one got hit by a car, another was shot. So when Pearyl left, Janice’s blood pressure skyrocketed, resulting in multiple trips to the ER.

In addition to distance, there are financial barriers to staying in touch. For instance, for a fee, Janice can send Pearyl emails and photos. But “those things are costly to me. Especially because I’m on a fixed income,” she said.

After four years of making the grueling drive to see Pearyl, Janice’s heart broke. Literally. A major artery pumping blood from her heart ruptured. Three days later she had a stroke. She lost her ability to speak, read and write — every way of communicating with Pearyl.

“I couldn’t handle it,” she said. “The only highlight in my life of my life basically was going to see him.”

While in rehab, Janice’s primary care physician wrote the prison, asking on Janice’s behalf to move Pearyl closer to home. The letter explained what she had been through with her health.

“She is medically unable to travel to visit him in her current health state,” the doctor wrote. Janice’s recovery depended on seeing Pearyl. Her doctor’s words helped. The prison moved Pearyl 20 minutes away, a more manageable distance for Janice to ride. Her speech gradually returned.

A report from 2005 found, on average, adults are housed in prison more than 100 miles from their families. This makes it hard for families to visit loved ones, said Kim Gilhuly of the Human Impact Partners, a public health advocacy group focused on the health impacts of incarceration.

“There’s always conversation about how difficult it was to not be in touch with their loved one,” she said.

'A sense of relief'

These days, Janice gets a ride with Whitfield’s bus service. The families who ride chip in what they can for bus maintenance. It was Pearyl who noticed the flyer on the prison bulletin board and told her about it.

Once they arrived at the prison, Janice waited in her socks, holding a styrofoam bowl full of quarters for a vending machine lunch with Pearyl.

Women ahead of her in line struggled to get through the metal detector. “Is there underwire in your bra?” a guard asked. Another guard offered a staple remover to the woman setting off the metal detector. She heads to the bathroom to try and cut the metal out of her bra. Janice removed the wiring in hers at home.

“Any anxiety I may have had yesterday or last week or whatever, all of that is just gone. You know, I feel a sense of relief,” she said.

She and Pearyl talk on the phone since her speech returned, but seeing her child comforts her..

“I’m just really ecstatic, you know, because I’ve seen my baby,” she said.

Editor’s note: Side Effects as a rule identifies people by their preferred gender pronouns. However, because we weren’t able to talk to Pearl directly about which pronoun is preferred, we have avoided using them in this story.

An audit found Indiana Medicaid failed to record death notifications in 2016 and 2017, leading to an estimated $1.1 million in payments to managed care organizations on behalf of dead Hoosiers.
Read More

In Indiana, lawmakers, hospital administrators and parents are raising concern over the way children on Medicaid receive mental health treatment. They say state policy creates a revolving door situation, which can be costly and dangerous.
Read More 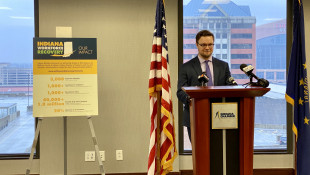