Gray fox populations are dropping, and a research project aims to inform measures to protect them in Indiana. It aims to collar gray foxes in two study areas: a central site in Shelby, Decatur, and Bartholomew counties, and a southern study site in Perry, Crawford, Harrison, and Orange counties.
It is a partnership between the Indiana Department of Natural Resources, the Wildlife Ecology Institute and Luther College. Lead researcher with Wildlife Ecology Institute Tim Hiller spoke with WFYI’s Taylor Bennett about what the project hopes to accomplish.

What does the gray fox population look like in this state?

For any species, there's, it's, it's exceedingly rare to have a population estimate. And when there is there's usually it's a range of numbers. We don't know with gray foxes. I mean, there's it's just not financially or logistically possible to come up with, you know, statewide population estimates. Having said that, based off of, you know, observation data, including from, you know, the bow hunter index that's done in Indiana, a lot of other Midwest states, we know the populations going down in Indiana, they seem to be more concentrated in the southern part of the state, simply because you know that, well, there's more forested land there, it's next to, you know, Kentucky. When you get farther north, you know, they might, where it's more heavily agricultural, you know, there's fewer observations. And then when we get up towards the Michigan border, where you might pick up a little bit more forested land, or they're coming from Michigan and dispersing into Indiana, we've picked up some observations, there's, well, there's no certainly no population estimate for gray foxes from it for any state that I'm aware of.

What makes the gray fox so unique, what is it exactly look like?

Well, you know, it's not really closely related to any other Fox or canid. It's, you know, it's very small, obviously, compared to even a red fox. It's one of the unique things about grey fox is that I find quite interesting is its ability to climb trees. And, you know, undoubtedly, it's going to use that as an escape mechanism from species such as coyotes, you know, may not be effective towards Bob cats, or something like that. But it's certainly a an interesting trait.

Well, Tim, what are you going to be doing during this research as far as observation and collection.

It's a very comprehensive project. It's three years of field data collection, and then one year of data analysis. So it's a it's a four gray foxes, this this is on par with what a white tailed deer project would be. So it's, to my knowledge, the largest most comprehensive project ever on on grey foxes. So we're our goal overall, in both of these multicounty study sites is to capture and radio color 40 to 70, gray foxes over the three year period to collect data. And so we're going to be looking at how many are surviving during that period, something called cost specific mortality. So when we can will determine you know how the, when we have a fox that's died, that's wearing a radio collar will will determine we'll do a D crossing trend to determine why it died if it had, you know, any diseases and stuff like that. And even during capture where we're collecting blood and tissue samples for disease monitoring, we can look at habitat use between the two study sides.

What is your ultimate goal of this once it's completed? What do you hope to do with this research?

Our goal is to formulate some recommendations for management what what recommended recommendations could we make that might improve their populations and so that'll be that'll be obviously a DNR decision about you know, what can be implemented based off of the decision making process which includes ecology and economics and, and the social side of things and all these other things.

Thank you for all your the work that you do and are doing and keep us updated.

Well, thanks so much, Taylor. 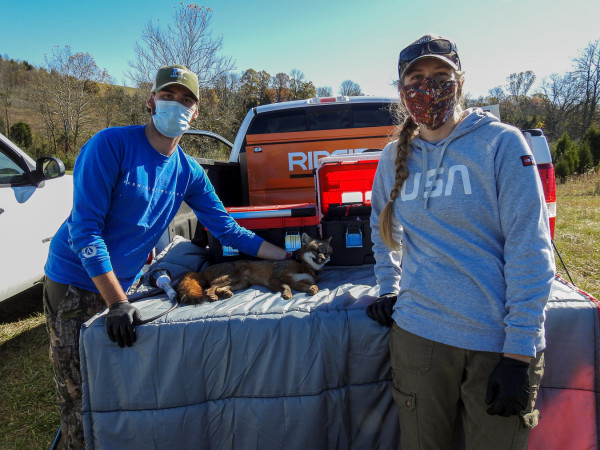 Tags:#GRAYFOX#INDIANA
Support independent journalism today. You rely on WFYI to stay informed, and we depend on you to make our work possible. Donate to power our nonprofit reporting today. Give now.