Health Officer Dr. Rafik Farag declined Tuesday to declare a public health emergency in Miami County that would lead to creating a needle exchange program, the Kokomo Tribune reported . State law requires a local health officer to declare an epidemic and show that the spread of the virus is caused by needle-sharing before the county can implement such a program.

Needle exchange programs involve locations where people who inject drugs can receive clean, sterile syringes and other supplies necessary to safely inject and properly dispose of used syringes. The programs have been proven to reduce the number of hepatitis C cases in a community, according to the Indiana State Department of Health.

The proposal for Miami County to begin the program came from Antonia Sawyer, the coordinator for the Miami County Systems of Care, who said the number of hepatitis C cases in the county qualify as an epidemic. The number of cases increased from 49 people infected in 2015 to 109 in 2016, according to the state Health Department. The number decreased to about 90 last year.

The department, Gov. Eric Holcomb's office and Peru Mayor Gabe Greer have all stated support for a syringe exchange program in the county. But the proposal received pushback from the county prosecutor's office, which said the program would lead to an increase in needles found in public places.

"This is serious," Sawyer said. "We cannot get comfortable in thinking that 90 cases is OK. How many more cases do we want to get?"

Farag said the county's health department is too short-staffed to manage a syringe program. Sawyer said state grant money could help, but Farag said he would support the program if Sawyer could first get the grant funding.

Sawyer said she can only get such funding if Farag declared a county epidemic, which he refused to do.

"If someone can convince me there's an epidemic, I'll declare it," he said. "But we don't have an epidemic right now."

Tags:Miami Countyneedle exchangehepatitis C
Support independent journalism today. You rely on WFYI to stay informed, and we depend on you to make our work possible. Donate to power our nonprofit reporting today. Give now. 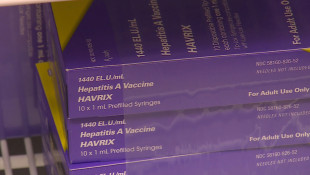 Hepatitis A is a highly-contagious liver disease that can be spread through fecal-oral means.