Here’s how Indiana tried to make schools safer from shootings

It was impossible to ignore the threat of school shootings in 2018.

Indiana leaders committed to make schools safer. Gov. Eric Holcomb convened a working group to study improving school safety, which produced 18 recommendations. And the next year, lawmakers more than doubled the amount of money schools could access for safety.

Yet it is unclear whether some recommendations focused on student mental health have been implemented. And the one subject the state’s political leaders have staunchly refused to discuss is broadly restricting access to guns.

"We're not going to, I believe, in the state of Indiana, take steps to restrict individuals who lawfully purchase a gun for sport or defense," Holcomb said last week after a mass shooting in Uvalde, Texas, where 19 children and two teachers were killed.

Holcomb’s opposition to gun control now echoes his response in 2018. The group tasked with addressing school safety explicitly avoided discussion of gun safety, deferring to lawmakers. And the legislature has made laws more permissive. Most Hoosiers over 18 will be able to legally carry a handgun without a permit or background check beginning this July.

Instead, state leaders have kept up a flow of money for school security.

“We have to be ever vigilant,” Holcomb said last week. “We cannot let our guard down. And we have the means and we have the financial wherewithal to make sure our schools maintain their integrity."

Many Indiana schools already take steps that are designed to make buildings more secure. They use a single entrance where visitors must be buzzed in, have police and run active shooter drills.

When it comes to increasing school safety, Indiana has focused on security, offering a massive infusion of money to pay for measures such as police and equipment — sometimes described as “hardening” schools.

Indiana distributed about $19 million in security grants to schools last year, more than double the annual amount the state allocated in 2018. Those grants are available to public and private schools, which can use them for costs including salaries for police officers, warning systems, and support for students and families, such as social workers. Schools are required to match between 25 and 100 percent of the cost, depending on their size.

There can be downsides to school safety measures. Some research has linked having police in schools to negative outcomes such as increases in arrest rates, higher discipline rates for middle schoolers and lower graduation rates.

But that has not deterred many Indiana schools. Grants last year were overwhelmingly dedicated to security. More than 70 percent of the money paid for school resource officers or police, according to a press release from the Indiana Department of Homeland Security. Another 25 percent funded equipment.

Schools have gotten lots of state resources to improve security, said Terry Spradlin, executive director of the Indiana School Boards Association. But Spradlin said it’s important to examine whether it is enough money and whether it can be better directed.

Indiana, for example, distributed free metal detectors to schools around the state in 2018.

"Are they being used? What other devices would be more efficient?" Spradlin asked. "Are there other cost efficient or necessary tools to secure the perimeter of a school building?"

Lawmakers passed a new requirement for schools to hold annual active shooter drills in 2019. And they created a new type of property-tax referendum for districts to seek funding for school safety initiatives. So far, just two schools sought the levy, and one was approved by voters.

Hiring resource officers and securing entrances are important steps to make schools safer, said Michele Gay, the executive director and co-founder of Safe and Sound Schools, a nonprofit founded by parents of children killed in the 2012 mass shooting at Sandy Hook Elementary School in Newtown, Connecticut.

But they should be subtle enough that students don’t feel like they are in a fortress. And they should take place in tandem with offering students mental health support, she said.

"I hope that we get to a point in our nation where it's not a tug of war, where we understand that all these things work together in balance and in concert to provide that comprehensive approach to the safety of our students and our schools,” said Gay, whose daughter was killed in the Sandy Hook shooting.

Indiana has laid out plans to improve mental health support in schools, and the legislature has taken some steps toward that goal.

It gave schools access to more money for mental health in 2019 by allowing them to use school security grants to fund student and parent support service programs, which can include therapists and counselors. This year, however, just 3 percent of awards went to those programs. A 2020 state law also requires schools to form partnerships with mental health providers.

But nearly four years after Holcomb’s working group released its recommendations to improve school safety, it’s unclear whether the state has followed through on some of the proposals focused on mental health.

The report, for example, called for the Family and Social Services Administration to identify a mental health screening tool that schools could use to evaluate students. A 2019 status update showed that had not been implemented.

FSSA spokeswoman Marni Lemons did not directly answer questions from WFYI about whether the agency had identified and provided a screening tool to schools, and if not, why not.

“In partnership with [the] Indiana Department of Education, the Indiana Family and Social Services Administration is supporting and encouraging schools to explore the usage of universal screenings,” Lemons wrote in an email Thursday.

Lemons also pointed WFYI to documents from the Indiana Department of Education that offer guidance to schools on selecting and implementing screening tools.

Schools across the country have placed increased emphasis on mental health treatment for students and creating positive culture since the 1999 shooting at Columbine High School, said Ron Avi Astor, a mass shooting expert and professor at the University of California, Los Angeles.

Those policies have broadly benefited students. Over the last 20 years, there has been a massive reduction in school violence such as bullying and victimization of students by race or sexuality, Astor said.

But Astor drew a sharp distinction between everyday school violence and shooters who carry out attacks like those in Uvalde.

"This is really an act of terrorism,” Astor said. "They want to create terror in the world. They are picking innocent victims with the idea that the media is going to cover this and that it's going to create panic, angst, anger in anybody who sees and hears it.”

Astor argued that gun control measures are an effective way to reduce the number of people killed in mass shootings.

One gun safety measure that Indiana has embraced is a so-called red flag law that allows law enforcement to seize weapons from people who courts consider dangerous. It had a high profile failure last year, when the gunman who killed eight people at a FedEx facility in Indianapolis was able to buy two AR-15s just months after his mother reported concerns to police.

For Indiana’s red flag law to work, law enforcement needs to pursue removing guns. And people need to be on the lookout for warning signs.

Astor pointed to several qualities shooters often have in common, such as obsessions with firearms, idolization of other shooters, and being suicidal and homicidal. People need to be aware of those signs, so friends, family and school staff know to treat them as warnings, he said.

"We're not tapping into that kind of rumbling before the earthquake,” Astor said. "When you have those set of things together, the response needs to be swifter and stronger to bring supports to that person and to remove, particularly, assault rifles and those things that could kill a lot of people very quickly.”

Tags:Eric Holcombschool safetySecured School Safety Grantsgun controlmass shootingschool shootingsschool shootingeducationindiana schools
Support independent journalism today. You rely on WFYI to stay informed, and we depend on you to make our work possible. Donate to power our nonprofit reporting today. Give now. 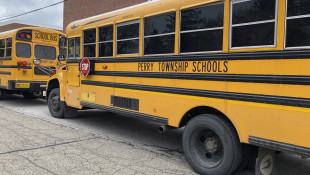 Perry Township Schools will vote Dec. 12 on a school redistricting plan to reduce bus routes as the district faces a persistent driver shortage. 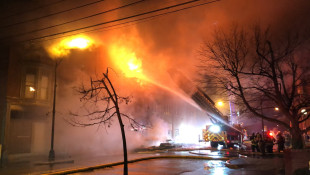