An Indianapolis addictions psychiatrist says repeated drug use literally changes the part of the brain where motivation and behavior are regulated, leaving the addict chasing a euphoria that only encourages the miserable addiction.

25-year-old Ben Gonzales thought heroin would be like other drugs he’d tried – alcohol, marijuana, cocaine - he could take them or leave them, “Nothing bad happened, just like everything I’d tried before. And I didn’t think much of it at first," he said. "The thing that is alarming to me now is that even after that first time I was like man! When can we get more? When can we get more?”

The thought that you’d find a heroin addict in his northside neighborhood 20 years ago would have been laughed off. Gonzales’ parents are scientists and he lacked for nothing. Drugs were just his way of having fun, “Maybe a little bit of peer pressure, but I would say it was pretty much 100% my decision," Gonzales admitted. "I’ve always liked feeling different, I guess. And everything that got put in front of me felt good, and that’s primarily the reason I used it was because it felt good.”

While someone is chasing that feeling by doing the drug again and again, neuroscientist Dr. Andrew Chambers of the I.U. School of Medicine says they’re structurally damaging the part of their brain that regulates motivation and behavior – the nucleus accumbens – unconsciously intensifying the urge to do that drug again. And it’s not just opioids. Chambers says alcohol, cocaine, nicotine and other substances cause similar damage, “There’s a lot of thinking out there that people who end up with the disease of addiction - they keep making bad choices because they’re criminalistic or they’re sinful or they’re dumb – you know, and that really is not the case," Chambers said. "It’s actually a disease process that removes their ability to control their behavior.”

Heroin, opioids and other drugs carjack the brain and make the addict believe they can control their drug use. For his parents’ sake, Gonzales went into treatment, but still believed he was in control. He ended up overdosing for the 6th time in his parents’ home. His father used Narcan to revive him.

“When I woke up from that they transported me to Community North. Tim Kelly was my doctor and I remember waking up. He basically told me you’re going to become a casualty of this unless you start taking this serious and when you give in and actually admit that your way is not working," Gonzales remembered. "And he was right. My way wasn’t working and it was never going to work.”

Gonzales again entered rehab at Fairbanks Hospital with a new understanding of his reality and has been clean for a year and a half.

Chambers also says criminalizing drug use and addiction has failed. “The silver lining, maybe the mixed blessing with the opioid epidemic, is I think it’s finally making it clear to a lot of people in our country that we cannot sustain a broken mental health and addiction treatment system," he said. "It’s not tolerable. You know, and it’s more than just about a narrow portion of our population. This is about all of us.”

Chambers believes in order to prevent and treat drug addiction you need adequate treatment infrastructure, appropriately staffed by experts who understand how drug abuse physically wreaks havoc on the brain, the person and their life. 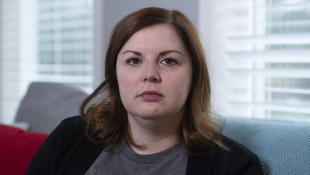