By Brandon Smith and Claire McInerny

New Gov. Eric Holcomb took the oath of office at the State Fairgrounds in front of a crowd of thousands to become Indiana’s 51st governor. That crowd included former governors Evan Bayh, Mitch Daniels and Mike Pence. And Holcomb remarked on the legacies of Daniels and Pence, both of whom he worked for.

“We’ve become a national leader in business growth and we’ve been landing jobs and business relocations that – 10, 12 years ago – were going to Austin or Boston or the Silicon Valley, practically anywhere but here,” Holcomb says.

Holcomb’s address harkened back to the state’s agricultural roots through to its present.

“Our harvests today might include driverless cars or pilotless barges, or stronger, more flexible metals, or breakthroughs for Alzheimer’s disease,” Holcomb says.

Holcomb used his speech to set the stage for his administration’s goals.

“Despite our ongoing momentum, we can’t afford to get complacent or take our eyes off the ball,” Holcomb says. “Too many Hoosiers and their families feel they’ve been left out or are in danger of being left behind.”

Holcomb talked about meeting the challenges of addressing the state’s drug epidemic and building a work force for the future.

“This is where I will focus every day, on ways to take our state to that next level. To make Indiana a place where people thrive,” Holcomb says.

As is custom, Holcomb’s first day in office includes signing a few executive orders, including one to fulfill a recently-announced agenda item: creating an executive director of substance abuse, prevention and treatment. The so-called “drug czar” will coordinate state government efforts to combat the drug epidemic.

Holcomb wasn’t the only official sworn-in.

Crouch is the former State Auditor. She says the Holcomb-Crouch team is committed to continue what she calls a “legacy of excellence.”

“We must elevate all Hoosiers to the next level, including those with disabilities, those with mental health challenges and those fighting to overcome drug and alcohol addiction,” Crouch says.

The state’s new Attorney General Curtis Hill is also Indiana’s first African-American Republican elected to statewide office. He didn’t speak at all about his office but spoke in glowing terms about Scripture, the country and the state.

“We here in Indiana will play an exciting role in leading our nation,” Hill says. “Hoosiers will light the torch and America will see the path.”

“And we can show them that we can deliver great customer service at great taxpayer value as we take Indiana to the next level,” Klutz says.

Klutz becomes the fourth state auditor in the last three and a half years.

McCormick became Indiana’s 44th Superintendent of Public Instruction and repeated her campaign promise to have a collaborative relationship with other policy makers.

“To all the other elected and appointed officials, I promise to be a good partner to the state of Indiana so we can move forward,” McCormick says. “To Indiana schools, I am proud to be one of you and I look forward to working with you.”

Former governor and Vice President-elect Mike Pence attended the ceremony but did not speak. It’s the same day the Pence family is moving out of Indiana, as Pence prepares to take his next office.

Tags:Eric HolcombSuzanne CrouchCurtis HillJennifer McCormickTera Klutzinauguration
Support independent journalism today. You rely on WFYI to stay informed, and we depend on you to make our work possible. Donate to power our nonprofit reporting today. Give now. 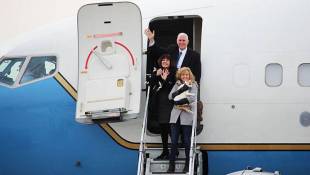 Pence boarded a United States-owned plane, which will later be known as Air Force Two when he takes office.