President Trump’s executive order suspends all refugee resettlement and bans anyone from seven nations from entering the country. Parts of that order have been halted by federal courts.

The ban has prompted protests and outcry from people in both parties. In Indiana, some political leaders – including Democrats Andre Carson and Joe Donnelly and former Republican Gov. Mitch Daniels – have spoken against the ban, while others – including Republican Congressmen Luke Messer and Todd Rokita – support it.

In a statement, he says there’s “no larger duty” than to protect citizens and borders and that he’ll monitor the executive order’s implementation. Holcomb adds he hopes the president’s move doesn’t “adversely affect” the state’s “welcoming environment” for members of what he calls the “law-abiding international community.”

Tags:Eric HolcombrefugeesDonald TrumpImmigrationimmigration ban
Support independent journalism today. You rely on WFYI to stay informed, and we depend on you to make our work possible. Donate to power our nonprofit reporting today. Give now. 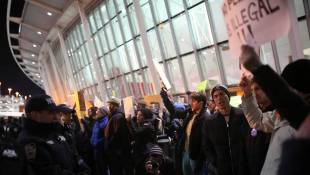 5 Questions About The Law And Trump's Immigration Order

President Trump's order on immigration has sparked a number of legal challenges, but the issues involved are far from settled.