Keith Smitherman is a violence intervention specialist for Prescription for Hope. (Photo by Jake Harper/WFYI)

Keith Smitherman makes a stop at an apartment complex in one of Indianapolis’s most violent neighborhoods, near 38th and Sherman. He’s delivering food vouchers to a young, pregnant mom, and she invites him to the baby shower.

“I ain’t coming to no baby shower,” Smitherman said with a smile, before getting back into the car.
It’s a hot day — I’m sweating into the seats of his car — and in his work, temperature matters.

“People start getting shot more as it starts getting warmer,” he said.

Violence in Indianapolis is on the rise. With 242 non-fatal shootings and 58 homicides as of June 26, this year is trending toward being one of the worst on record. While city leaders lament the problem, violence seems to be getting worse, not better.

A lot of victims of violent crime end up at Eskenazi Hospital, where Smitherman (pictured above) works as a violence intervention specialist for a program called Prescription for Hope. When someone lands in the ER for a violent injury, like a gunshot or a stabbing, Smitherman appears in their room to talk to them.

It’s easier when someone has been that close to death.

“It’s the teachable moment,” he said. “This is the time when they’re real tender and ready for some kind of intervention.”

Getting At the Root

Teenage impulsiveness is often blamed for violence, but according to recent research from the Center on Juvenile and Criminal Justice, poverty is a root cause of violence. Poor neighborhoods tend to have worse schools, lower graduation rates. And, if you’re black, multiple studies have shown it’s harder to get a job. So the money that can come with crime starts to look pretty attractive when you grow up in these communities. Getting people jobs, education and insurance can help lift people out of poverty, and tackling poverty may be one way to tackle violence.

Smitherman works with young people between 14 and 30. Most are black males, and they’ve grown up poor. Smitherman helps them with signing up for insurance, finding a job and finishing their education.

“It’s important to us that they go get their GED,” he said. “The only way to get a good job that you’ll keep is to get some education.” 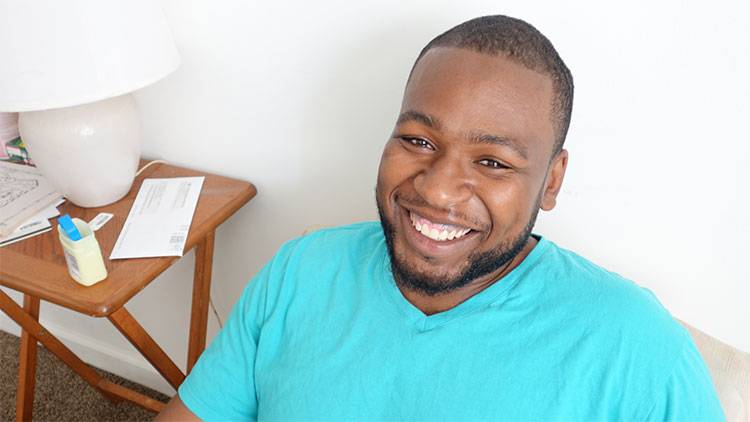 Tyler Wilson, 23, lives on the east side of Indianapolis. He joined Prescription for Hope last year and is now working on getting his commercial driver’s license. (Photo by Jake Harper/WFYI)

One of the program’s participants is Tyler Wilson, a 23-year old who used to sell drugs. He lives in an apartment with his sister on the east side of Indianapolis. Last year, he was at a friend’s house when someone pointed a gun to his head, demanding money. Wilson fought back.

“The bullet’s actually still in my leg right here,” he said. “I can feel it with my fingers.”

Before the incident, Wilson had been arrested for possession, which made him want to change his life. He was shot shortly after bonding out of jail, which put him in the hospital for almost a month.

That’s when Smitherman showed up and told him about Prescription for Hope. Wilson was hesitant at first but eventually agreed to join.

“It just seemed like it could bring change,” he said.

Wilson needed help getting a job, so he could pay his bills without resorting to selling drugs. He says Smitherman pushed him every step of the way, and he’s now in the process of getting his commercial driver’s license, so he can drive semis.

“I always wanted a CDL,” he said. “But I probably wouldn’t be getting it so soon.”

Prescription for Hope paid for his training. 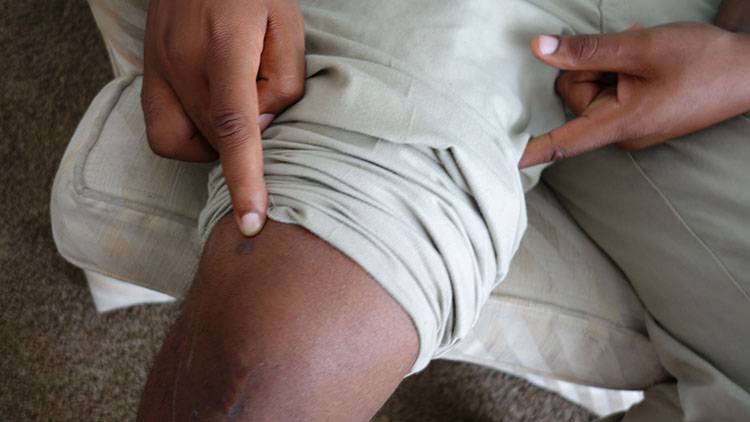 Tyler Wilson was shot during a robbery last year. The bullet entered near his knee and is still embedded in his leg. (Photo by Jake Harper/ WFYI)

Prescription for Hope got started in 2009, when doctors at Eskenazi noticed a problem: The emergency department had a lot of repeat customers.

Clark Simons is a trauma surgeon at Eskenazi who helped start Prescription for Hope.

“It was not uncommon that we’d have a person who might be a person of violent trauma, and within a three-to-five year time period, there was a 30 percent chance or higher of them coming back,” Simons said.

He said they realized the young people coming in with gunshot wounds were nearly always involved in crime because they had few other choices.

“For some, that’s the only option they have to provide for their family,”  he said. “So poverty itself is a public health issue.”

Simons and his colleagues modeled Prescription for Hope after other successful violence intervention programs around the country.

“Most of these individuals ... they’re asking for help,” he said. “As a healthcare professional, I think it is our obligation to help our patients.”

And Eskenazi says the program’s working, and that just 4.6 percent of program participants end up back in the ER.

But it’s not zero, a fact that eats at Smitherman.

“We’ve had one guy killed after he joined the program,” he said. “That’s about as big a failure as you can have, so that one really bothers me.”

Ultimately, though, there are thousands of violent crimes each year in Indianapolis. The program can’t reach everyone.

Smitherman and the other social workers can only work with people who come into the hospital, or sometimes their family members. They can’t help the people who call their office, asking to enroll. They can’t help others who might need need help getting a job or signing up for insurance or paying for groceries.

So Smitherman celebrates the small victories for the people he is able to help.

“To have so few come back with a violent injury,” he said, “shows the program is highly successful.”

Tags:Chasing the DreamPrescription for Hopeviolence interventionEskenazi Hospital
Support independent journalism today. You rely on WFYI to stay informed, and we depend on you to make our work possible. Donate to power our nonprofit reporting today. Give now.

View Program
prescription for hope
Create your own infographics
hey