Thousands of adopted Hoosiers are hoping to learn more about their birth families through a law that went into effect in July.

The state closed adoption records from 1941 to 1993, making it hard for many to get information about their origins. The law now makes most of those records available to the children who were put up for adoption.

But, getting access to that information is taking longer than some people expected.

'I Never Thought I'd Get This Opportunity' 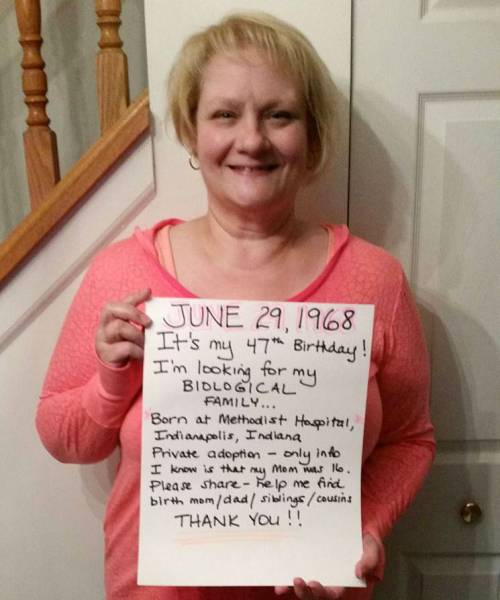 From the moment you step into Kathleen Anderson’s home, it’s obvious family means a lot to her.

Pictures of her relatives are scattered throughout the home.

But when it comes to who she looks like, the picture isn’t as clear.

Anderson was adopted as an infant. She has pictures from that time, but very little information. She holds a family portrait taken at church when she was a baby.

"I kind of always like this picture because it always captures to me the essence of who they were at that time, so proud to have me as their daughter," she says.

Her adoptive parents told her she was born at Methodist Hospital in June of 1968. They agreed to raise her Catholic, as part of the adoption agreement. And, Anderson later found out her mother was just 16 years old when she gave birth. But, that’s not enough to satisfy her curiosity.

"I guess I’ve always just wanted to know, 'What was my parent’s story?'"

She may eventually find out.

A law that went into effect in July opened up previously-closed adoption records. It gives Hoosiers put up for adoption during that time period access to more information, which could include their birth mother’s identities.

Anderson filed the required paperwork shortly after the law took effect, and expected to get the requested information within a few months.

"I had expected at the time that I filed that maybe by Thanksgiving or the beginning of December I might have it," she says. "Now I’m thinking it might be March or April."

The Indiana State Department of Health is in charge of processing the adoption records requests. The agency didn’t make anyone available for an interview, but a media relations representative said in an email the state has received more than 3,300 requests under the new law. About half of those requests came within the first couple of weeks after the law went into effect. ISDH says it’s fulfilled just over 860 of them.

The agency says the staff tasked with processing the requests also has other adoption-related tasks, many which are tied to legal deadlines.

“We are continually looking at ways to decrease the processing time, including hiring additional staff, because we know this information is very important to those who are seeking it,” the email says.

The agency says it could take more than 20 weeks to process each request.

Anderson says she’s frustrated by the long wait to get her information. Legislators passed the bill in 2016, but waited to put it into effect until 2018. The thinking was that would give the state two years to prepare.

Anderson says she’s not sure why the state didn’t allocate additional resources to help.

But, she’s hopeful she’ll finally get answers to her lifelong questions soon.

"I never thought I’d even get this opportunity," she says. "I’ve waited 50 years, a couple more weeks, months in the grand scheme of things is that not bad."

Tags:birth recordsadoption
Support independent journalism today. You rely on WFYI to stay informed, and we depend on you to make our work possible. Donate to power our nonprofit reporting today. Give now.