Hoosiers will see more farm equipment in the fields in the next few weeks, as spring corn and soybean planting ramps up.

The U.S. Department of Agriculture expects farmers in Indiana and nationwide to plant more soybeans than ever this year, while corn acreage looks to hold steady.

“And that’s what’s encouraged some folks to shift some of their intended corn acreage into soybean acreage this year,” he says.

Nationwide, farmers are expected to plant 89.5 million soybean acres, up 7 percent from last year. Six million of those acres should be in Indiana, a 6 percent increase from 2016. If realized, it’ll be a record crop for the state and the nation, according to the USDA.

The nation’s projected corn acreage is 90 million acres this year – a 4 percent drop from last year. In Indiana, it’s the same as in 2016 at 5.6 million. That’s half a million fewer acres of the state’s signature crop as its farmers planted in 2015.

Planting this year is “off to a good start,” says Nielsen, “as little of a start as we’ve had.

“There’s certainly nothing on the immediate horizon that would indicate that there’s any major problems lurking in the weeks ahead,” he says.

“It makes it even more important than ever to try to grow a crop that’s uniform and vigorous to begin with,” Nielsen says. “And then that may tolerate some of these extreme weather events a little bit better and not lose as much yield.”

Weather permitting, Nielsen expects most Hoosier farmers will get their corn and soybeans in the ground by the end of May.

Tags:AgricultureU.S. Department of Agriculturecornsoybeans
Support independent journalism today. You rely on WFYI to stay informed, and we depend on you to make our work possible. Donate to power our nonprofit reporting today. Give now. 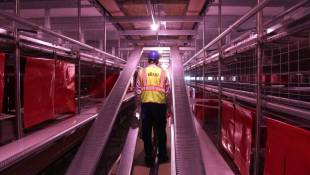 Going cage-free is a costly, time-consuming process for even the biggest egg producers, like Indiana's Rose Acre Farms.