Organizers in Indianapolis will host a rally to protest school violence at the statehouse this weekend, and it coincides with a national march in Washington D.C. surrounding the same issue.

The school shooting in Parkland, Florida, earlier this year, and subsequent news coverage have sparked, and highlighted, student activism around the country to address gun violence.

Now, some Hoosiers plan to attend the March For Our Lives at the nation’s capitol this weekend. Herron High School junior Annie Meek says for her, going to D.C. is an act of unity as well as a call for action.

“I believe there’s supposed to be like half a million people going and to just stand with that many people, it’s an empowering feeling and it’s hopefully very moving,” Meek says.

Meek left from Indianapolis Friday morning with around 40 other students, and more than 50 students left from Bloomington to attend the D.C. march.

Meek says it's a way to make their voices heard, but she says a key next step is improving access, for more people to do the same in the future.

“A super key point is to remember communication," Meek says. "Communication between students and administrators, between young people and adults, between citizens and legislators.”

Meek, as well as other students on their way to D.C., also say more common sense gun laws should be considered.

A statehouse rally in Indianapolis based off the national march starts at 11 a.m. tomorrow. A Facebook event says more than 2,000 people plan to attend.

Tags:Parkland, FloridaMarch For Our Lives
Support independent journalism today. You rely on WFYI to stay informed, and we depend on you to make our work possible. Donate to power our nonprofit reporting today. Give now.

Indiana lawmakers created a no-interest, no-fee student aid loan for job training called Accelerate Indiana in 2021. They used $75 million from federal COVID relief funds for it. About 50 students are set to graduate and get certifications after the funds first year, according to INvestEd.
Read More 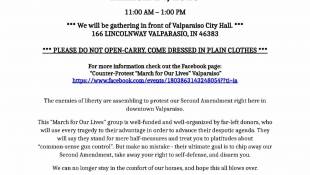 Valparaiso Man Organizes Counter-Protest to March for Our Lives

The rally for the protection of the second amendment will be the same day students across the nation hold rallies calling for gun control legislation and safer schools.