How Do Teachers Prepare For And Prevent School Shootings?

Metal detectors and “hardening” schools are one of several steps the state and schools are taking to keep kids safe, but another essential piece remains: how can teachers prevent or better prepare for the worst case scenario?

In Brown County, class was already in session for a group of educators, law enforcement, and mental health professionals a week before school started. The group gathered for active shooter response training, or what to do – like run, hide, or fight – in case of a hostile aggressor.

“That’s going to – if the door’s locked and it’s dark – that the shooter is going to maybe pass our room and they’re the safest that way,” he says.

In all three districts he’s taught in, it’s mostly focused on only one of the three parts: the lockdown.

“We have to be the ones that are protecting the students and we have to take those measures and quite honestly, just sitting there and kind of waiting for someone to come in is not enough to protect them,” he says.

Teachers and administrators say more thorough training with the run, hide, and fight strategies gives them tools to better protect themselves and their students.

It’s actually the same kind of training used in Noblesville schools, where teacher Jason Seaman tackled a shooter as the student opened fire in his classroom earlier this year. No one died, and the shooter injured only two people, including Seaman.

At a press conference shortly after the shooting, Seaman said it was his only option.

“I want to make it clear that my actions on that day, in my mind, were the only acceptable actions I could have done given the circumstances. I deeply care for my students and their well being,” he said.

It’s a hard truth for some to consider the possibility of taking similar actions in their classrooms, but more schools have started training staff in this type of active shooter response training. The company behind the training used in Brown County and Noblesville said in an email that 142 school corporations in Indiana have used their model.

Elementary school principal Kelli Bruner says despite tough conversations on the issue, everyone agrees on the bottom line.

“It is nerve-wracking to think about that happening, but our number one priority is the safety of the students,” she says.

School shootings have spurred a lot of talk about safety this year, mostly to “harden up” schools - the state has made more money available for schools to amp up security. Some schools have even made moves to offer certain staff access to guns.

But educators and other officials have also stressed the importance of another, softer side of safety. In an interview earlier this year state Superintendent of Public Instruction, Jennifer McCormick, said mental and behavioral health remains a key part of the conversation.

The state recently released a report full of recommendations to improve school safety, with mental health services and support as a key theme. But even without those recommendations, current and future teachers alike have been looking for ways they can close those gaps too.

Dan Melnick at Indiana University’s School of Education says student voice drives professional development events, and in terms of school safety, students want to focus on what can make them a great teacher and make their schools safer: building relationships.

“They understand there is a need for school safety - it's not that they don't feel unsafe right now, it's more that they want to know how to better a school, better a situation when they get there,” he says.

As schools lock more doors to keep people safe, educators hope to open others for the same reason. 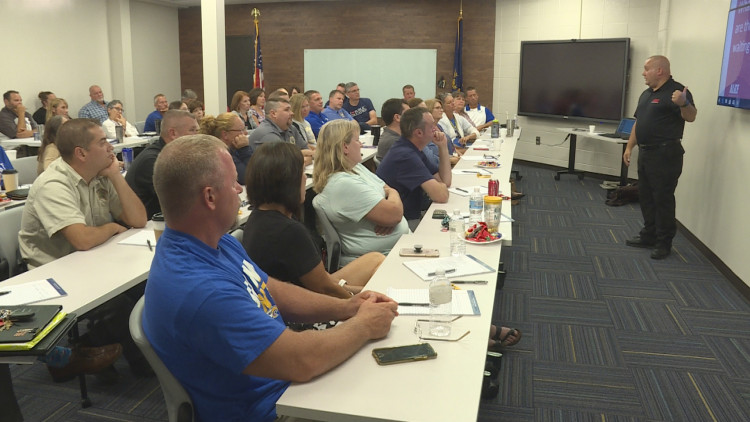 Tags:school safety
Support independent journalism today. You rely on WFYI to stay informed, and we depend on you to make our work possible. Donate to power our nonprofit reporting today. Give now.