How One Group Builds Friendships Among Adults With Autism

There’s an endless stream of advice online about how to make friends as an adult. The listicles and blog posts often mention that it’s harder for twentysomethings to form meaningful friendships.

Making friends can be even harder if you’re on the autism spectrum, especially if you don’t live in a major city. But one group is trying to build those connections in rural America.

It’s pretty quiet in downtown Henderson, a town in western Kentucky. A lot of daytime workers have left, and the streets and sidewalks are mostly clear.

Jesse studies a piece of paper he’s holding, and the three are off and running.

The paper has pictures of murals, building facades, things like that—all clues for a scavenger hunt.

On this warm summer evening, They’re competing with a couple other groups, all part of a larger social group called TEAM G.

It’s her brainchild. The group meets once a month, just to hang out. They do things most young adults like to do, including bowling and pool parties.

Sonya came up with the idea of a social group after watching her own son grow up.

"He was going to church," she says. "He had his family. He had work group, but there was nothing out there social, and that was what he was really missing."

Social issues are one of the most common symptoms in people on the autism spectrum.

They can have trouble developing friendships, even when they really want to. And it can often be hard to talk to people or express feelings.

Hannah says that was a problem for her.

"All you gotta do is just get people to join in, talk to 'em, don't be shy, so you won't be afraid of getting out into the world and stuff like that," she says.

The website MeetUp.com lists hundreds of groups for adults with autism. But Sonja couldn’t find any in her largely rural region of Kentucky.

That’s until she met Dawn Wheeler, the founder and director of Experiencing Autism Together. It’s a support group for people with autism and their families.

"Our younger people that were within the group are growing up, then we had some older ones that wanted to join, but we have family events and a lot of younger kids at those events and they wanted to mix with people their own age," Dawn says.

The western Kentucky group started two years ago with just five people. Now it’s grown to more than a dozen.

He had trouble making friends before he joined the group, and other than spending time with his parents, he didn’t get out much.

"It's putting us together as a big family. That's what it became," he says.

Rose is one of the newer recruits. She joined after her 21st birthday, and she’s still trying to develop friendships.

"Yeah, I'm getting there, getting closer," she says. "It's a lot of fun, and I really enjoy doing all these activities and getting out of the house and be independent."

"Last month, Sonya hosted just a party at her house, and one of 'em, the comment was, 'We're being just like those that are our age," Dawn says. "We're out on Friday night at a party."

Dawn and Sonya notice that the group is getting closer. Members are more talkative, so dinners were added to monthly events so everyone has more time to hang out.

And they’re anticipating more growth. Now, the group ranges in age from 21 to 36. But as others join, Sonja thinks it may split up so everyone’s closer in age.

Tags:autism
Support independent journalism today. You rely on WFYI to stay informed, and we depend on you to make our work possible. Donate to power our nonprofit reporting today. Give now. 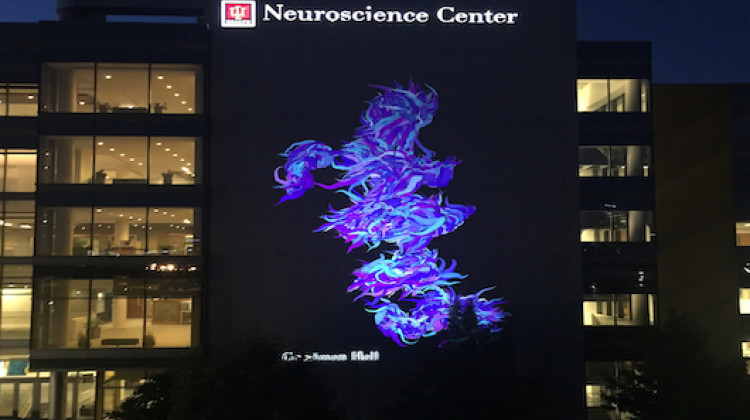 The project combines art, therapy and technology and is a collaboration between researchers at Herron School of Art and Design, IU School of Medicine and Indiana University's Advanced Visualization lab.
Read More