How Will Climate Change Affect Energy Demand In Indiana?

A new report from the Purdue Climate Change Research Center shows that as Indiana warms, the state will demand more cool air and less heat. Leigh Raymond is the lead author of the report on how climate change will affect energy demand in Indiana.

Raymond says because commercial businesses need more air conditioning, their energy bills will likely go up while residents’ bills will go down slightly.

“That’s partially because people spend a lot more time in commercial buildings during the daytime which is when temperatures are higher,” he says.

The hotter temperatures will also make coal and natural gas plants run less efficiently. Extreme heat can shorten the life of a plant and make the energy from those plants less reliable. 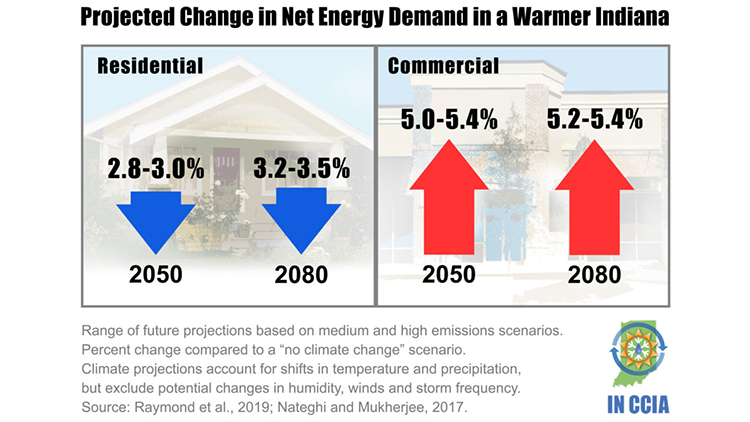 The report also talked about policy changes that could reduce carbon emissions in Indiana. Raymond says more than half of U.S. states provide incentives for renewable energy projects or a tax on carbon emissions. Indiana doesn’t have one.

Raymond says a normal carbon tax would be set at about $100 per ton, but a tax of less than half that amount would reduce the state’s emissions by 10 percent every year.

“So these actually relatively small adjustments in terms of policy interventions actually have pretty significant effects,” he says.

Tags:climate changePurdue UniversityPurdue Climate Change Research Centerenergy demandutilities
Support independent journalism today. You rely on WFYI to stay informed, and we depend on you to make our work possible. Donate to power our nonprofit reporting today. Give now.