In East Chicago, Indiana, federal officials have approved a plan to allow involuntary relocation of families who remain in lead-contaminated public housing beginning on April 1.

These would be considered “emergency transfers” to units that have been inspected for lead in East Chicago and, in Illinois, Cook County and Chicago. Families would stay in these units while they kept looking for permanent housing, still using the same rent vouchers and other HUD-provided counseling and resources.

Most residents got extensions on their vouchers through around June by Wednesday’s deadline to do so. That’s all according to the Shriver Center on Poverty Law, which negotiated the settlement that required the Department of Housing and Urban Development to make a decision Wednesday on whether the East Chicago Housing Authority could proceed with emergency transfers.

HUD spokesperson Gina Rodriguez says West Calumet’s many vacant homes are beginning to pose “a danger to those that are remaining, because of the potential for crime and squatting.” At least two-thirds of the complex’s more than 1,000 residents have moved out since last fall.

The neighborhood is part of an Environmental Protection Agency site, with high levels of lead and arsenic in its soil. East Chicago officials did not immediately respond to requests for clarification on who might be relocated after March 31.

But Shriver Center staff attorney Emily Coffey says any transfers so soon will be a huge hardship for families already struggling to find good places to live.

“It’s just going to be virtually guaranteeing that they won’t be able to move to communities of opportunity, if there is an emergency transfer at this time,” Coffey says. “It’s just very disruptive to somebody’s life to have to move once, let alone twice, in a few-month period.”

The involuntary relocation plan is part of an effort to clear the complex out, so the city can demolish it later this year. That plan still needs funding, and approval from HUD. The agency said last month it was in the final stages of granting that approval.

Coffey says the Shriver Center will keep pushing to give the 100 or so families left at West Calumet more time and help to move out – without interruption.

Tags:East ChicagoleadWest Calumet Housing Complexlead contamination
Support independent journalism today. You rely on WFYI to stay informed, and we depend on you to make our work possible. Donate to power our nonprofit reporting today. Give now. 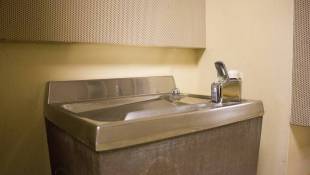 The Indiana Finance Authority will offer free drinking water tests at all of the state's public schools.