I-69 Frontage Road Cuts Through Middle Of Monroe Co. Farm

If you take the new Sample Road exit off State Road 37 in Bloomington, an unusual sign might catch your eye.

A farmer living along the future I-69 corridor says it’s his warning to others whose properties are in the path of the interstate.

Cathy Jackson has lived on the farm for almost her entire life.

“I had all of this pasture, I could just ride this horse and have the best time,” she says.

After growing up here, she and her husband built their own home on the property. They raised a family here, and hoped their children would do the same.

“This was paradise to me,” Cathy says. “I loved it. I thought when I left here it would probably be toes up. But, it didn’t end up that way.”

Cathy recently moved out of the county because the peaceful view from her front porch just isn’t the same. What used to be a pasture is now a busy road.

“I said when they started this they might as well have taken my heart,” she says.

With Section 5 of Interstate 69 coming through Monroe County, a new frontage road cuts right through the middle of the Jacksons’ farm. That means the horse barn is on one side, and the pasture where the animals graze is on the other. 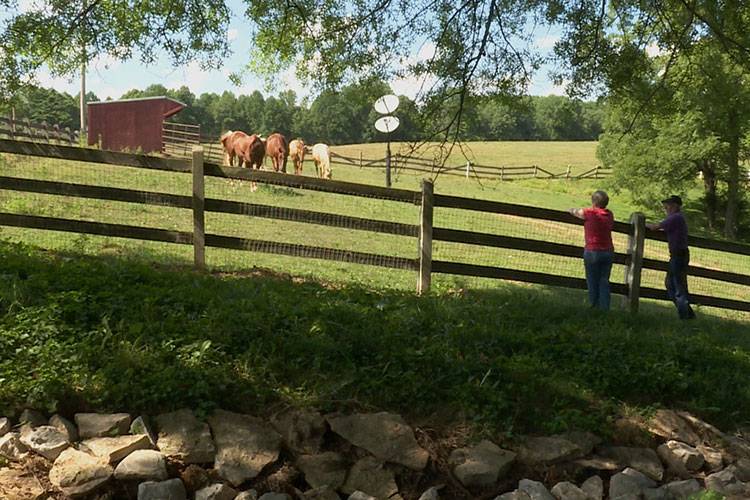 The Jacksons have to walk their horses across the road to get them to the barn. (Barbara Brosher/ WFIU-WTIU News)

“To get these horses to the barn I’ve got to walk them across the road,” says Joe Jackson. “It’s dangerous for one thing and it just split the farm in half.”

It led Joe to put up a sign that reads “Another family farm destroyed by I-69.” He hopes people will take it seriously.

“The state just, they don’t care about the people they destroy," he says, "and that’s what they’ve done.”

But the state only took the I-69 Section 5 project over from a private developer last year. INDOT says it wasn’t privy to early conversations I-69 Development Partners had with affected property owners.

“Things were talked about that have been lost in the files since I-69 Development Partners is no longer part of the project,” says INDOT Spokesperson Andy Dietrick.

Dietrick says the Section 5 project only impacted about 59 acres of farmland. He says they put up horse crossing signs near the Jackson farm and continue to work with the family. But he says some requests just aren’t possible to accommodate.

“In the case I think where Mr. Jackson was asking for a culvert or bridge to be built, it just wasn’t economically or engineering wise feasible,” he says.

But the Jacksons say the interstate took more from them than a portion of their land. It robbed them of their slow way of life.

“I really wish that everybody who had been affected by this would have not just decided ‘Oh well it’s the state and I have to do this because they say they have to,'” Cathy says.

Major construction on Section 5 is supposed to be complete by the end of August, which is nearly two years behind schedule.

Tags:Interstate 69Monroe CountyinfrastructureAgriculture
At WFYI, our goal is to cover stories that matter to you. Our reporting is rooted in facts. It considers all perspectives and is available to everyone. We don't have paywalls, but we do need support. So if unbiased, trusted journalism is important to you, please join us. Donate now.

Months into the pandemic, many desperate workers say they still havent received unemployment benefits. And as many WorkOne re-employment offices reopen by appointment this week, staff fear theyll be caught in the middle between those people and the Indiana Department of Workforce Development.
Read More