That's especially challenging in Elkhart, known as the recreational vehicle capital of the world -- and the city with the nation's highest unemployment rate during the recession.

Now, the RV industry is booming -- but that's created problems of its own.

In one of Thor Motor Coach's largest factories in Elkhart, dozens of RVs are waiting to be assembled. Some are just bare frames; others only need their TVs and countertops installed.

"So here you can see the motorhome starting to take shape," says marketing director Wes Bogan as he moves down the assembly line. "We've installed the side walls, so those are going in…"

Bogan says almost all the components are being made by hand -- there's none of the automation you see in some modern factories.

"The human factor is something that, with the processes that we have in place, is still the best way to go," he says.

But finding the humans to carry out those processes hasn't been easy lately.

The RV industry and its home base of Elkhart are rebounding from the 2008 financial crisis. Now, RVs are in even greater demand than they were before the recession -- Thor alone posted a record $4 billion in sales last year.

Eighty percent of all RVs sold are made here. And the industry needs more workers than it's been able to find.

That's a problem for Elkhart Mayor Tim Neese, who says a company town is only as good as its workforce.

Neese, who took office this year, wants to preserve the business they have -- but he's got some other irons in the fire that would soften the impact of another recession. They include new housing, a major oncology hospital and a launch pad for new start-ups.

Elkhart Chamber of Commerce CEO Kyle Hannon says almost 20 percent of the local labor force commutes in from somewhere else. He'd like that to change.

"We need to up our game from the livability standpoint," he says. "It will be harder to keep the business creators and the upper management in the community if they don't have a place to live and a place to enjoy."

But Elkhart County has 150,000 open jobs right now -- and only 104,000 people to fill them, according to census data. So Hannon says finding those workers is their priority.

He worries that eventually, companies will move somewhere else where people want the work.

"We talk about the importance of diversity. We also talk about how important it is to remember who we took to the prom," he says, laughing. "And you know, we took the prettiest girl to the prom, and we don't want to abandon her on the dance floor. So we really work hard at both."

That means marketing the RV jobs around the country with social media and even billboards. Dobson says they're starting to see some return on those -- and it can't come soon enough. He worries that eventually, companies will move somewhere else where people want the work.

Elkhart's RV companies have added facilities in other states -- but at this point, they're also still expanding here.

Back at Thor, CEO Bob Martin is showing off the comfy interior of a mid-price Hurricane model Thor RV -- two TVs (plus one outside), a full kitchen and room for seven people to sleep.

Martin says they can patch their labor gap with more capacity and more overtime, and in-house training for new workers.

Those workers will need to learn to build systems like the "slide rooms" that let the RV expand when it's parked and shrink when it's on the move.

"It says retract, so…" Martin pushes a button beside the RV's bedroom door, and the mechanism whirs to life, pulling in the side of the RV far enough to make it driveable. "I can safely stand right here, and it comes in about 18 inches."

It's all part of the RV lifestyle, which Martin says hasn't changed much -- despite some ups and downs.

"I lived through the recession. Just watching the industry really just slow down and watching the city just become quiet was -- it was a scary time," he says. "And to see it come back relatively quickly... I'd rather have these problems than any other problems." 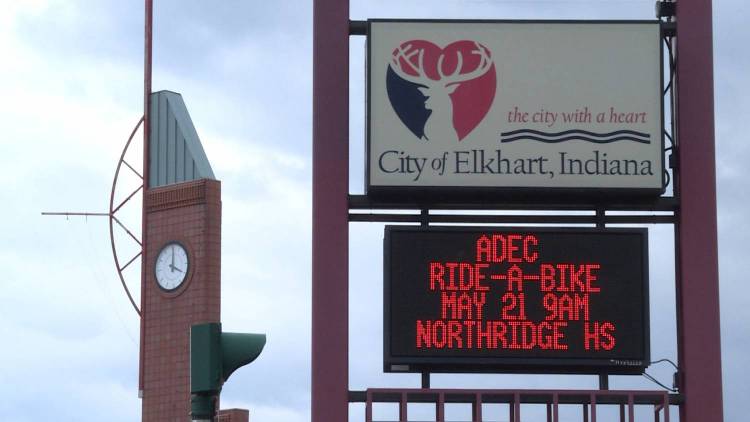 Tags:jobsElkhartIvy Tech Community CollegemanufacturingRV salesThor Motor Coach
Support independent journalism today. You rely on WFYI to stay informed, and we depend on you to make our work possible. Donate to power our nonprofit reporting today. Give now.