Republican U.S. Rep. Todd Young’s victory in the Indiana Senate race Tuesday night also marked a milestone for his opponent: It was the first race Democrat Evan Bayh has ever lost.

Bayh faced an uphill battle in an election that ended in rebuke for most Democrats in Indiana and nationwide.

Older Hoosiers may have remembered Evan Bayh because his father, Birch Bayh, was a popular senator who authored Title IX and other civil rights laws and helped lower the voting age to 18.

Others may have recalled the younger Bayh’s time as Indiana governor in the 1990s, or U.S. senator in the 2000s.

But many voters might not have known Evan Bayh well at all as of July, when state Democrats swapped him in for their initial Senate candidate, former U.S. Rep. Baron Hill. And those voters were Evan Bayh’s biggest problem, says Indiana legislative analyst Ed Feigenbaum.

“They don’t remember Evan 1.0, the bipartisan fiscal conservative who worked across party lines,” Feigenbaum says. “They know Evan Bayh as presented to them … as a guy who, in the last six years … has not seemed to care about what’s going on Indiana.”

Bayh left Indiana politics abruptly in 2010 – in the middle of a senate race – and took a job as a political consultant for a Washington lobbying firm. This paved the way for Republican U.S. Sen. Dan Coats to retake the seat.

Now, Coats is retiring, and Young will be his replacement. His campaign spent tens of millions of dollars spent trying to reinforce Bayh’s newer reputation among voters.

They used attack ads like one in September, which says: “After the economy crashed, Indiana families were struggling. We turned to Senator Evan Bayh to protect us from the Washington insiders and Wall Street bankers who got us into that mess. But instead of going to work for us, Evan Bayh went to work for them.”

At the Indiana Democrats’ election night party in Indianapolis, supporters like Edward Furbeck were disappointed but not all that surprised that Bayh couldn’t pull out a last-minute win.

“He probably should have been here earlier, and maybe made a difference and made a bigger contribution earlier,” Furbeck says.

But he was worried Young would be a divisive senator – the ex-Marine ran on Tea Party principles in his first campaign for Bloomington’s 9th District Congressional seat, back in 2011.

At the GOP election night party down the street, though, Young supporter Abhi Reddy disagreed.

“I think he’s the sort of person who’s very solution-oriented; he’s not a partisan in that sort of sense,” Reddy says. “I think he’ll get above the mess and get some stuff done out there.”

“I think our country is so divided right now, and so I’m just hoping and praying for healing after today,” she says. “We all have to come together – at the end of the day, we’re one nation, not two parties.”

Bayh made the same call in his concession speech – the first of his 30-year career.

“I also hope more than anything that together we can find a better kind of politics – one that emphasizes hope, not fear, one that brings us together, not divides us, and one that finds common ground that we can stand on and move forward on together,” he says.

But Bayh gave little indication of what would be next for his career. The Indiana Democratic Party declined to comment for this story.

As for Young, he’ll return to Washington in January to work with now-senior Indiana U.S. Sen. Joe Donnelly. The Democrat will face his first re-election bid in 2018.

Tags:Election 2016Todd YoungU.S. SenateEvan Bayh
Support independent journalism today. You rely on WFYI to stay informed, and we depend on you to make our work possible. Donate to power our nonprofit reporting today. Give now. 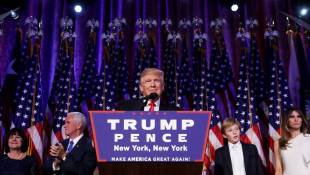 The rise of a candidate with no experience in the military or elected office confounded nearly everyone in politics. But Trump won over white voters with his promise to "Make America Great Again." 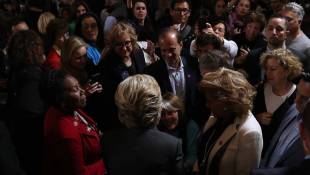 4 Questions Democrats Now Have To Grapple With

Democrats lost the presidency Tuesday and were unable to gain control of the Senate or the House. They have some soul-searching to do as they think about the future.