SALEM, Ore. (AP) — During a Black Lives Matter protest on Sept. 21, a Portland police officer was sitting in a vehicle used to broadcast warnings and loud noise at protesters when he saw a burning object sailing through the air toward him.

The officer jumped out of the car and found a beer growler made into a Molotov cocktail, a burned rag stuffed into its mouth. The firebomb had not gone off.

According to court records, that bottle produced key evidence that helped lead to charges against an Indiana man who authorities said had come to Portland for protests.

It is one of the most serious court cases to stem from the prolonged protests that rocked Portland last year.

Muhammad, 24, was arrested in Indiana on Friday and is in the Marion County Jail. Joshua Pond, listed on court documents as Muhammad's attorney, said he had no comment on behalf of his client.

Muhammad was at the center of a dramatic moment during last summer's racial justice protests in Indianapolis when police and protestors were in a standoff near the governor's residence.

IMPD Lt. Andrew Rolinson and Muhammad huddled between the protestors and the police and reached a compromise to turn the march back towards downtown, avoiding a confrontation. The two embraced before they walked side by side through the throng of protestors and cars.

In Oregon, officers examined the unexploded firebomb. A price tag allowed them to trace the beer growler to the store where it had been purchased. Store video showed Muhammad and his girlfriend, buying growlers and bats, Multnomah County Deputy District Attorney Keven Demer said in an affidavit.

DNA samples from the unexploded firebomb had “an extremely strong comparison” to Muhammad, Demer said.

On Sept. 23, during a protest at the Justice Center building in downtown Portland, another Molotov cocktail was thrown. This one exploded when it hit the ground, creating a large fireball and spraying flames onto the leg of an officer, Demer said. Multiple videos show Muhammad throwing the device, he added.

“Anyone who thinks they can get away with trying to murder police officers and destroy this city should think again,” Police Chief Chuck Lovell said in a statement announcing Muhammad's arrest. ”More investigations are underway."

FBI agents apparently blended in with protesters in an attempt to pinpoint those who were violent.

During a protest on Oct. 11, FBI agents in plainclothes saw Muhammad, dressed all in black but wearing distinctive red-and-gray gloves, use a metal baton to break windows of the Oregon Historical Society, Portland State University and several businesses, Demer's sworn statement says.

The information was relayed to police officers. They chased the suspect, who allegedly ditched a loaded pistol, and was found with a loaded magazine in his pocket that fit the gun, authorities said. Unlawful possession of a firearm is another of the charges Muhammad faces.

Demer noted that Muhammad could face a mandatory minimum sentence of 10 years if convicted and is a flight risk. He asked the court to set bail at $3 million.

Judge Leslie Bottomly denied the request and instead ordered that Muhammad be held. 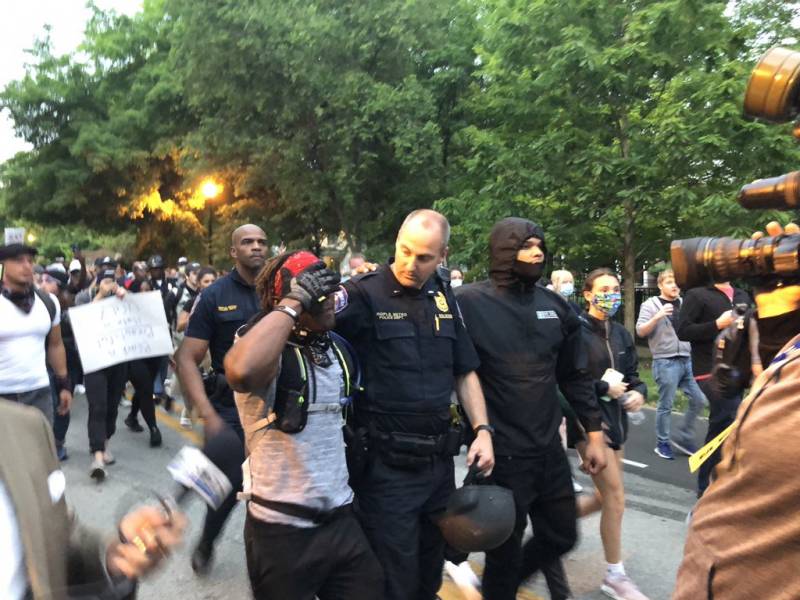 Tags:protests
Support independent journalism today. You rely on WFYI to stay informed, and we depend on you to make our work possible. Donate to power our nonprofit reporting today. Give now.