Indiana Ag Lines Up For Trans-Pacific Partnership, While Manufacturing Splits

WEST LAFAYETTE, Ind. -- Congress could be asked to vote on the Trans-Pacific Partnership as soon as September -- even while both presidential candidates oppose the trade deal, and manufacturing workers rally against it.

However, the agreement has support from most manufacturing business owners -- as well as support from another of Indiana's most trade-reliant industries: agriculture.

The TPP is designed to open up trade between the U.S. and 11 other Pacific Rim countries: Japan, Vietnam, Australia, New Zealand, Peru, Brunei, Malaysia, Singapore and Chile, plus Canada and Mexico. It would cut taxes on imports -- known as tariffs -- and attempt to enforce new labor and environmental standards for participants.

But the TPP has taken a beating on the campaign trail. Candidates say it's the kind of deal -- like Bill Clinton's North American Free Trade Act, or NAFTA -- that led Indianapolis' Carrier company to seek cheaper labor in Mexico, while still shipping its products back to the U.S.

"But overall, that's not what happens when we talk about these trade agreements," said Andrew Berger, the vice president of governmental affairs for the Indiana Manufacturers' Association, or IMA.

The trade group's member businesses are generally in favor of the TPP.

"By and large, lower trade barriers is a good thing for manufacturers in Indiana and the United States," Berger said.

Indiana exports a lot of cars, pharmaceuticals, heavy machinery and other products around the world already, he said, "...but to have the access in those countries basically made less expensive through the reduction of tariffs and things like that, which is what free trade agreements do -- I mean, that's all to the positive for Indiana manufacturers."

The United Steelworkers union represents the people that work for those manufacturers.

"I don't know how they [the IMA] can take that stance," said union representative Rick Bucher. "That's the problem. They're exporting everything -- our jobs."

That's what happened with the laid-off Carrier workers, he said, plus thousands more.

Bucher said that government subsidies and less regulation on industry overseas makes it harder for American businesses to compete without outsourcing. And he argued that the TPP's enforcement provisions aren't strong enough to keep the playing field level.

But others, like the IMA, think automation has killed more jobs than trade. Either way, they say there's a bigger problem: not enough workers trained to fill the higher-tech jobs that remain.

"The Chamber and others … certainly feel that isolating the United States and not being part of the global economy is not the way to go," Schuman said.

The agriculture sector also has a lot riding on free trade. Indiana is eighth in the nation for the value of its ag exports -- mainly soybeans, corn and pork.

The Indiana Farm Bureau supports the TPP, said policy advisor Kyle Cline, because it would give farmers cheaper access to countries where a growing middle class has more money to spend on a better diet.

Indiana farmers could export more pork to feed people and soybeans to feed livestock, Cline said, and use more corn to feed hogs at home.

All that, he said, would create jobs that would stay in the U.S. crops and livestock have to be produced and processed close together than, say, steel and cars.

"And then, of course, as farms expand ... you'll see on-farm hires increase as well," Cline said.

He argued that free trade represents a growth opportunity for the small- and medium-sized businesses that produce 85 percent of Indiana's exports -- agricultural and otherwise.

"We grow things in Indiana and we build things in Indiana," Cline said. "Agriculture and manufacturing are the two key sectors that form our economy, and we're ever-increasingly reliant on international trade for our success."

It's just not clear if Congress will find TPP a help or a hindrance in that effort. 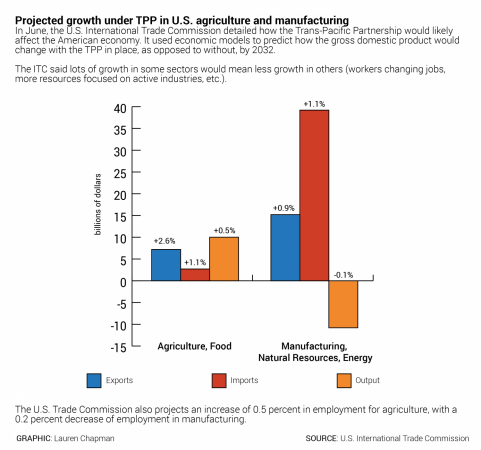 Tags:United SteelworkersmanufacturingTrans-Pacific PartnershipIndiana Manufacturers' AssociationAgriculture
Support independent journalism today. You rely on WFYI to stay informed, and we depend on you to make our work possible. Donate to power our nonprofit reporting today. Give now.