The Indiana nonprofit substance use advocacy group Overdose Lifeline received a $178,000 grant to reduce and prevent overdoses in Indiana schools.

The number of teens dying from drug overdoses has risen dramatically throughout the pandemic. Data from a UCLA research study shows that between 2019 and 2020, fatal overdoses among teens increased by 94 percent, from 492 in 2019 to 954 in 2020.

Overdose Lifeline Executive Director Justin Phillips founded the nonprofit advocacy group in memory of her son, Aaron, who was 20 when he died from a heroin overdose in 2013. Phillips said schools are an underserved population for substance use outreach.

“We're not reaching the schools and there are overdoses that are happening. We know that there are,” Phillips said. “So this is an opportunity to just layer on another blanket of protection.”

Indiana law allows school districts to stock the overdose reversal medication naloxone as an emergency medication, in the same way albuterol and epinephrine are stocked to treat severe asthma and allergies. However, only three school districts do, according to a report from the Indiana Department of Health.

“Maybe they're concerned about the message that it sends,” Phillips said. “They don't understand that it's really emergency medication. Maybe they're, you know, under the belief system that it can't happen to them. But it could be somebody that comes to your school campus for a sporting event or a theatrical event that could potentially experience an overdose.”

Phillips said Overdose Lifeline will work to get 275 more schools equipped with naloxone over the next three years.

“We will be adapting our naloxone education course to that specific population and weaving in some of the National Nurses Association themes and points that need to be covered for this population,” Phillips said.

The training will be offered for free to any school in Indiana that is interested, she said.

The highly potent and deadly opioid derivative fentanyl mixed in with other substances — like heroin, marijuana and cocaine — is driving the increase in adolescent overdoses.

“The increases are almost entirely due to illicit fentanyls, which are increasingly found in counterfeit pills,” said UCLA addiction researcher Joseph Friedman, in a news release. “These counterfeit pills are spreading across the nation, and teens may not realize they are dangerous.”

Phillips said education and open conversations are important in preventing overdoses in teens.

“We need to try not to ignore or deny things that [are] concerning because we don't have a perfect solution or answer,” Phillips said. “We really need to spend some time hearing [teens], listening to what they need, and not assuming we know best as adults, because we're not them.”

The grant comes from CareSource, a nonprofit managed care organization that provides health care in six states, including Indiana.

Tags:opioid overdosesubstance use disorderOverdose LifelineIDOH
Support independent journalism today. You rely on WFYI to stay informed, and we depend on you to make our work possible. Donate to power our nonprofit reporting today. Give now. 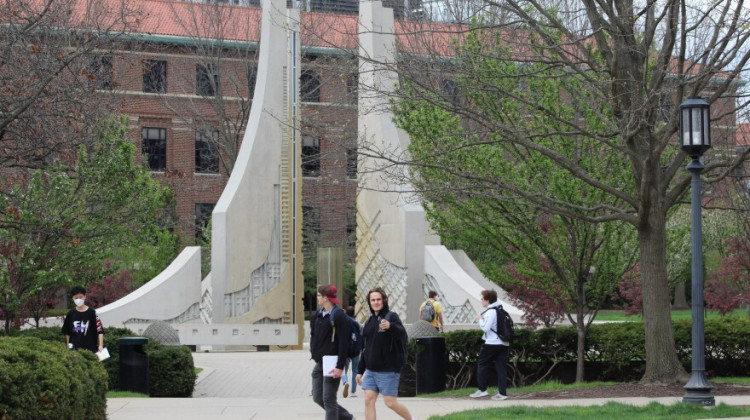 Tippecanoe County currently has the highest number of cases per ten thousand residents of any county in Indiana. At Purdue, the university reported a 21% testing positivity rate within its campus community - close to the all-time high.
Read More

The donation wasn’t announced by either institution, which are separate organizations, but was noted as a “contribution to a related entity” made Dec. 30 in IU Health’s financial statements issued this month, the Indianapolis Business Journal reported.
Read More