The Chamber often endorses candidates for state legislature, but this endorsement is only the third for a candidate in a statewide election. The Chamber endorses candidates from both major political parties. But Indiana Chamber President and CEO Kevin Brinegar says there’s one major reason they endorsed McCormick over incumbent and Democrat Glenda Ritz.

“Jennifer McCormick would be more effective and have better more effective relationships with the key players as far as the legislature, the State Board of Education, the governor and the Commission for Higher Education and others,” Brinegar says.

State superintendent Ritz sued the State Board of Education regarding board procedures and clashed with Governor Mike Pence on many issues, which launched a short lived gubernatorial campaign to oppose him.

Brinegar says his organization interviewed McCormick before the endorsement and she said her priority as state superintendent would be establishing positive relationships in the state.

“We know that the legislature is going to be controlled by the Republicans,” Brinegar says. “I think she kind of stands a better chance out of the gate having come from the same party.”

Brinegar says the Chamber also agrees with McCormick’s policy belief around state-funded preschool, which would expand the current pilot program to more low-income families. Ritz, along with Democratic gubernatorial candidate John Gregg, have proposed universal pre-K in the state.

Tags:Glenda RitzIndiana Chamber of CommerceJennifer McCormickKevin Brinegar
Support independent journalism today. You rely on WFYI to stay informed, and we depend on you to make our work possible. Donate to power our nonprofit reporting today. Give now. 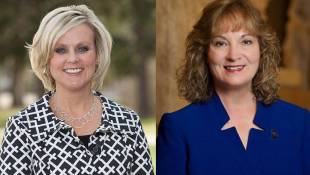 Democrat Glenda Ritz and Republican Jennifer McCormick will face off for the Indiana superintendent for public instruction race in their only scheduled debate Oct. 17 in Fort Wayne.