FORT WAYNE, Ind. -- Coal dominates Indiana’s energy production, but the industry has faced major challenges nationwide over the past decade. A new study asks what would happen if coal workers were retrained to produce a different type of energy — solar.

“There’s, I think, a large concern in the public to be able to find, you know, hard working people good jobs,” said Pearce.

The study measured the “best case” and “worst case” cost range of retraining Indiana coal miners, anywhere from $8 million to $82 million. It estimates a range using scenarios in which different numbers of coal employees choose to work in the solar industry.

“A single company, and the CEO pay for a single year, could more than cover the training for all of his employees,” he said.

The high end of that range is about 5 percent of the coal industry’s roughly $40 billion dollar annual revenues.

Pearce also said solar is a far cleaner energy source than coal and is competitive economically.

“If we want to maintain low electrical prices in the United States, particularly if we’re interested in conserving the environment,” Pearce said, “it makes a lot of sense to make the transition as soon as possible.”

Indiana’s coal industry employs roughly 4,000 people, while only 1,600 Hoosiers are employed by the solar industry. But that trend flips nationally, with 150,000 people employed by coal compared to 210,000 who work in solar.

The study was published in the journal Energy Economics by Pearce and his coauthor, Oregon State University public policy professor Edward Louie.

Tags:job trainingsolar energyCoal
Support independent journalism today. You rely on WFYI to stay informed, and we depend on you to make our work possible. Donate to power our nonprofit reporting today. Give now.

Going green: IndyCar to use renewable fuel beginning in 2023

IndyCar will become the first North American racing series to use 100% renewable fuel in its race cars.
Read More

No charges for agents in botched Larry Nassar probe

The U.S. Justice Department said Thursday it will not pursue criminal charges against former FBI agents who failed to quickly open an investigation of sports doctor Larry Nassar despite learning in 2015 that he was accused of sexually assaulting female gymnasts.
Read More 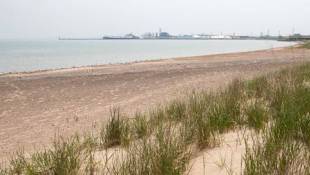 The EPA says the projects are expected to stop or capture 13 million gallons of untreated stormwater from contaminating swimming beaches.