Indiana is set to have unexpectedly big corn and soybean harvests this fall. That means continued tight profit margins for farmers and more low food prices for consumers.

Purdue University agronomists made their annual announcement of the state’s crop production forecast at the State Fair Thursday.

They say yields should better than expected, after weeks of wet, patchy weather. But economist Chris Hurt says that extra supply for the same demand will mean bad prices for Hoosier farmers.

“The good news is there’s going to be a big harvest, and a big harvest is going to help us keep food price inflation very moderate,” he says. “While that’s not so good for the farm sector, that sure is great news for all of us as consumers and for the world that we are striving to feed.”

Despite ample production, the USDA is only rating about half of Indiana’s corn and soybean crop as good or excellent – another symptom of this summer’s uneven climate.

Across the country, this fall’s soybean production is set to be up 2 percent from 2016, with corn production down 7 percent.

It all means the fourth year in a row of tight profit margins for Hoosier farmers.

To break out of this period, Hurt says, input costs will need to keep coming down – things like cash rent for land, seed and fertilizer prices, and equipment costs. He says those are falling, but slowly.

“They take time for adjustment,” he says. “And then low prices in the marketplace, over time, do help to get additional usage.”

As those costs come down, he says, a little less supply wouldn’t hurt either.

“Hopefully over time, we discourage some production around the world,” Hurt says. “And that’s not easy to do – once land comes into production, around the globe, it tends to stay in production. But maybe we get some enhancement in price, and bring costs down to get those in better balance.”

Tags:Agriculturecornsoybeanscrop yields
Support independent journalism today. You rely on WFYI to stay informed, and we depend on you to make our work possible. Donate to power our nonprofit reporting today. Give now. 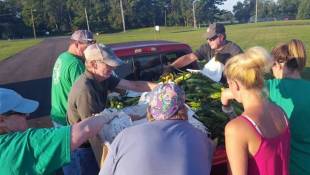 The project pairs numerous organizations around the state to increase access to healthy produce. 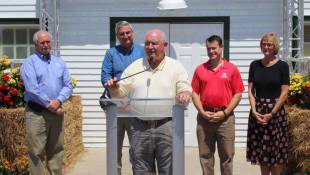 Perdue met in private with state lawmakers about the 2018 Farm Bill and reassured Hoosier farmers he'd protect their stake in the export economy.