Indiana Counties Look For Solutions To Horseshoe Damage On Roads 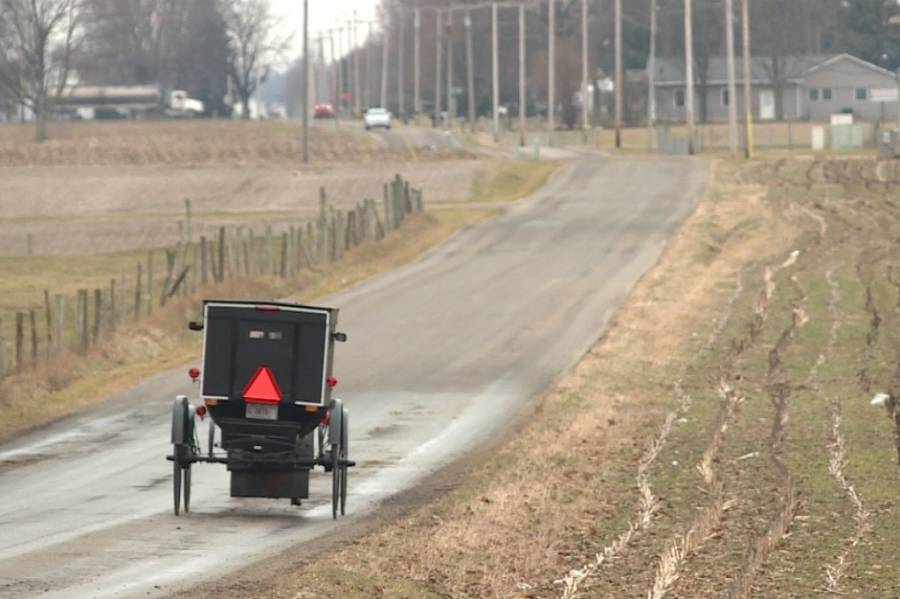 Several Indiana counties are spending hundreds of thousands of dollars each year to repair major road damage. And, the source of some of those problems presents a unique challenge.

According the Indiana Business Research Center, Indiana has the third largest Amish population in the country. Amish families use horses and buggies to get around, and the steel horseshoes can be especially hard on pavement.

That has several communities looking for ways to reduce road damage, while also respecting Amish beliefs.

People drive from all over Indiana to indulge at some of Middlebury, Ind.’s Amish restaurants, or browse through some of the shops.

“It’s a big thing for tourism, but they also supply a lot of labor for our recreational vehicle industry,” says Elkhart County Commissioner Mike Yoder. “We have a pretty significant cabinetry and furniture business as well in the two county area, LaGrange and Elkhart county.”

That large Amish population means you see a lot of buggies passing by. And, you may feel a difference when driving down the roads yourself. 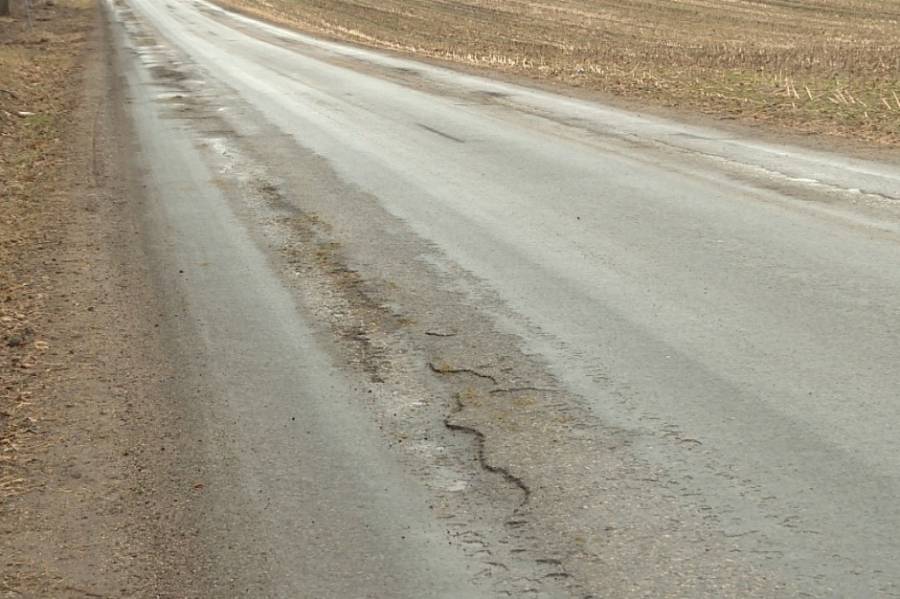 After awhile, horseshoes create what are called horse troughs on roads. Water gets into the long lines of broken pavement and freezes in the winter, creating potholes. (Photo: Steve Burns)

Yoder points down a road with a long line of large divots in the pavement. They line up with where a horse’s hooves hit the asphalt.

“Right in through this area and you can see this is a good example,” Yoder says. “Where the water’s started to collect, the buggies have chipped up all the asphalt.”

Yoder says you’ll find some sort of horseshoe damage on about half of Elkhart County’s roads. 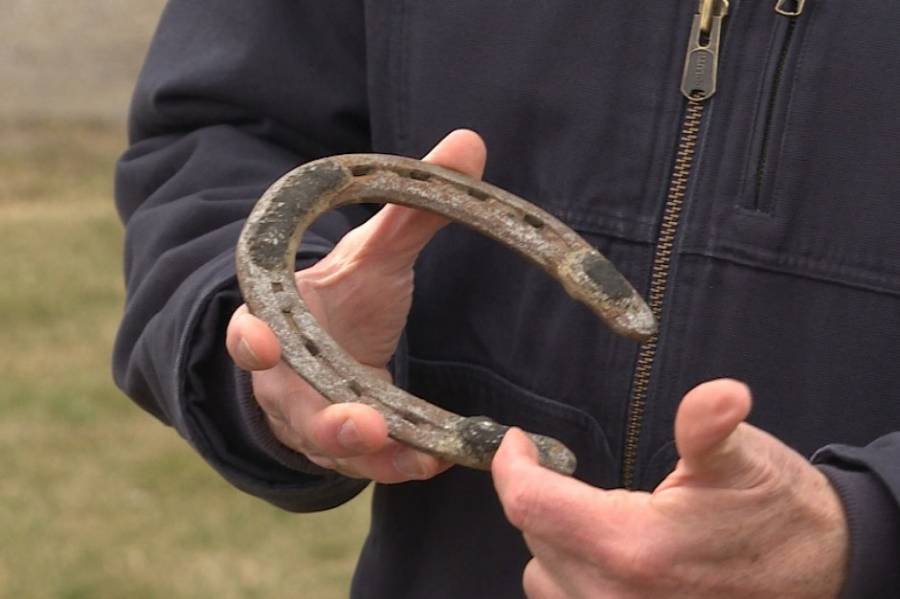 We spoke to several members of the Amish community about the issue, but they didn’t want to do recorded interviews or have their names published. An Amish farrier told us the county has some regulations on what types of materials they can use in their horseshoes, which addresses some of the problems with roads. He says it’s necessary to use heavy-duty materials to keep horses from sliding on wet roads. That’s especially important in northern Indiana, where there’s a significant amount of snow every year.

But, repairing the damage is expensive. Elkhart County charges a $55 annual buggy plate fee to help cover the costs.

“The problem with regulating horseshoes is that somebody has to enforce it,” he says. “And, our county sheriff has been reluctant to pull over buggies and lift a horse’s foot to check on the horseshoes.” 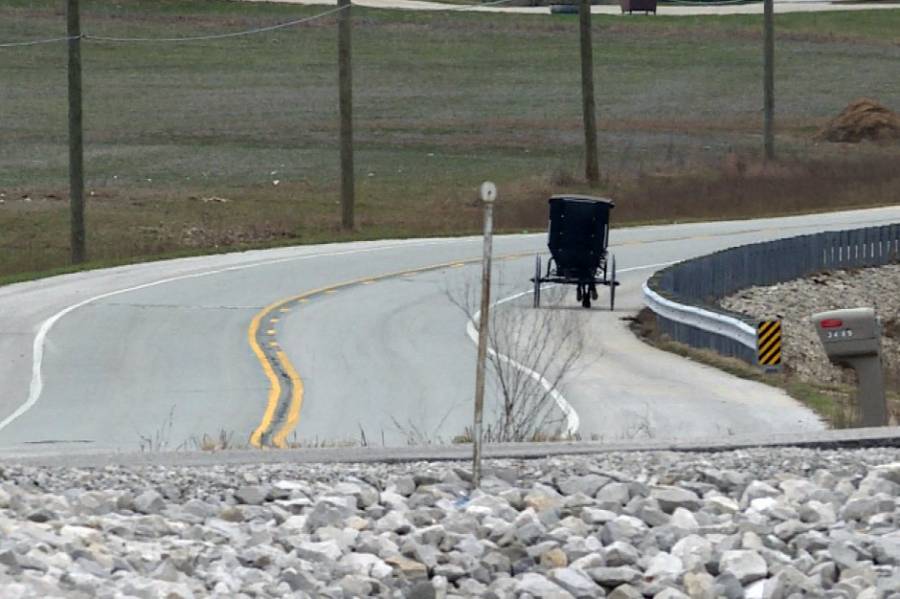 The Old Order Amish in Orange County have more restrictions on what they can do to their buggies than some of the communities in northern Indiana. They don't have lights, reflectors or plates. (Photo: Barbara Brosher)

More than four hours south of Elkhart County, another Indiana community is facing a similar dilemma.

Orange County is home to a smaller number of Old Order Amish. Horseshoe damage has always been a problem here, but it recently got worse.

“With the new Indiana Crossroads grants, we’re doing a lot more hot mix asphalt paving,” says President of the Orange County Commissioners Richard Dixon. “And, I think the damage is even more pronounced on the hot mix asphalt.”

Dixon and other county leaders met with members of the Amish community to come up with solutions that would work for both parties. The Amish agreed to use less abrasive horseshoes for half of the year, and heavy duty versions during the remaining months.

Dixon says the Amish will change to less abrasive horse shoes in April, but it will take months before the county can assess whether it’s making a difference. He acknowledges it’s a rule that will be hard to enforce.

“We’re hoping that it works well and we can build on that and find other things we can agree on that’s not so intrusive for them,” he says.

Other States Grappling With Same Issue

Wisconsin is also home to a large Amish population. Damage to roads in portions of the state are so bad, a state legislator wants to ban certain horseshoes. The bill would prohibit animals from wearing horseshoes that will injure the highway. It also allows local governments to pass their own rules banning the uses of spiked horseshoes for half of the year. Those who violate the bill will face fines, starting with their second offense.

But, Elkhart and Orange County leaders say they think it’s an issue that should be left up to local governments.

Tags:infrastructureElkhart CountyOrange County
Support independent journalism today. You rely on WFYI to stay informed, and we depend on you to make our work possible. Donate to power our nonprofit reporting today. Give now.

Wetlands are good at trapping a lot of carbon dioxide in a small space. Now that the state is protecting fewer wetlands, it's possible more CO2 will get released into the air as they’re destroyed.
Read More

Indiana Democrats hope the state party’s support of marijuana legalization can become a political victory for them. But political scientists say achieving that will likely take considerable time and effort.
Read More