Indiana Education Funding Not Back To Pre-Recession Levels

A recent report from a national teachers union points to a number of states failing to reach pre-recession spending levels for public education, including Indiana.

Executive director of AFT Indiana, Sally Sloan, says even with school funding measures on local ballots, it's not enough.

"All of the schools in Indiana are getting less money. Less money means fewer teachers - it means fewer experienced teachers, if and when that's possible in the districts," she says.

She says the state's voucher program also shares responsibility for the decrease of dollars in public education. Sloan says lawmakers can take steps to reverse that, by pressing pause.

"They have to consider putting a freeze on to vouchers, and a freeze on to charter schools - or a moratorium," she says. "I don't think they can turn back the clock, but they can certainly slow down what's happening there."

Indiana ranks 35th nationally in dollars per student, according to the report.

Tags:education fundingAmerican Federation of Teachers
Support independent journalism today. You rely on WFYI to stay informed, and we depend on you to make our work possible. Donate to power our nonprofit reporting today. Give now. 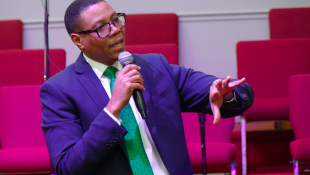