After two resolutions were passed at a historic special meeting of the Bloomington Faculty last night, the Indiana Graduate Workers Coalition (IGWC-UE) voted with a 78% majority to suspend the strike until Sept. 26.

The first resolution passed at the faculty meeting affirms no retaliation against any individuals, including Student Academic appointees for summer and fall, participating in the strike. The second resolution says that the IU Board of Trustees must engage in dialogue with the Coalition and provide a pathway to union recognition.

Katie Shy, English Ph.D. candidate, said the Coalition will spend the next four months on next steps in forming a cohesive union.

“General membership [of IGWC-UE] voted to officially become a local chapter of United Electrical Workers,” Shy said. “So, we get to do really exciting things like choose our local number, elect our local leadership, decide the bylaws that will structure our union for the next years to come. Just what we want our union to look like and how we can get as many people engaged as possible.”

“Faculty showed up. They were there and that was extremely … exciting,” said Benjamin Robinson, chair of Germanic Studies. “It was exciting in the sense that you want to believe that people can act to gather for the common good. And I think that's what we saw. So, it was really moving in that way.”

Since the strike was suspended a day before today’s deadline for the submission of final grades, graduate workers must submit final grades for the spring semester tonight at 8 p.m. Those with summer teaching appointments also must resume teaching current summer sessions.

The coalition plans to elect union officers and set up a new bargaining committee before the start of the fall semester.

Tags:Indiana Graduate Workers CoalitionIGWC-UEBloomingtonIndiana UniversityIU Board of TrusteesExecutive Committee of the Bloomington Faculty Council
Support independent journalism today. You rely on WFYI to stay informed, and we depend on you to make our work possible. Donate to power our nonprofit reporting today. Give now. 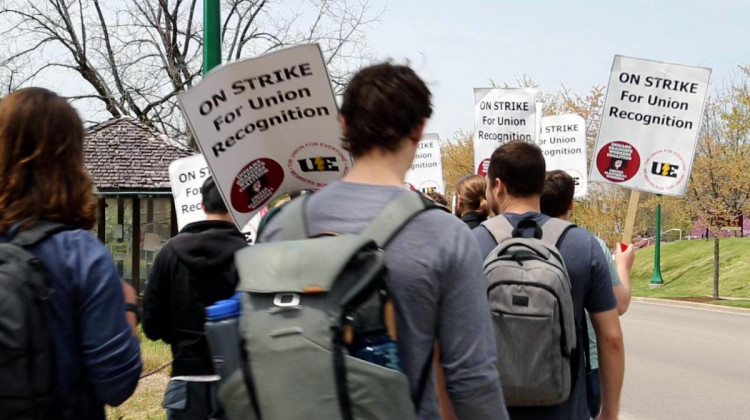