Indiana House Republicans want to cut more than $105 million from state funds earmarked for students from low-income families. While the updated budget proposal would free up money to boost the per-student dollars the state provides to all districts, many of the state’s wealthier districts stand to benefit more than their higher-need urban counterparts.

The proposed cuts, if they make it into the final budget, would take place over the next two years. For Indianapolis Public Schools, that could mean $7 million less to meet the needs of its students from low-income families between now and 2021.

Indiana’s state Senate is expected to unveil its budget proposal in the coming weeks.

Although urban districts tend to get more money per student than their suburban counterparts, educators in city schools say that money is needed to support children who come to school with more trauma and challenges.

“If we’re talking about our students who are living in poverty and trying to break that poverty cycle … those are the students that we really need to be investing in,” Jeff Butts, superintendent of Wayne Township, Marion County’s second-largest school district, said. “And yet we’re doing just the opposite.”

Deciding to spend more statewide, rather than increasing the so-called complexity funding, which provides extra funds for schools with higher numbers of students who qualify for public assistance, would create stark winners and losers when there’s not much new money to go around, Butts said.

Wayne Township would lose more than $3 million under the budget proposal, or about 19 percent of its current complexity funding. That could mean cutting teaching staff and increasing class sizes, Butts said. Meanwhile, the district’s per-student funding would rise by just 1 percent overall. Indianapolis Public Schools would also see its per-student dollars inch up by 1 percent, an increase offset by the $7 million loss.

Yet just to the north, Carmel schools would bring in 5.5 percent more per-student, less $144,196 because of the $105 million cut. In Zionsville, a suburb to the west, the district would actually get more money for its needier students. Both districts are projected to see higher student enrollment compared to some other districts in Marion County, and they have lower percentages of students from low-income families.

Rep. Todd Huston, the chairman of the budget-writing Ways and Means Committee, said the changes in funding reflect positive economic indicators for Indiana. Districts would see less extra aid because fewer families are signing up for government support, such as cash benefits or food stamps.

“We have a very, very strong economy,” Huston, a Republican from Fishers, said. “These numbers are an accurate reflection of where the economy and families are in Indiana.”

While it remains at the discretion of lawmakers whether or not to send additional funds to districts with a larger share of low-income students, the updated House budget doesn’t do this.

Since 2015, the state has cut extra aid for low-income students dramatically. Four years ago, complexity funding totaled about $1.1 billion. This year it’s $763 million, and by 2021 it would fall to $657 million under the House plan.

While adding to per-pupil aid might make funding seem more equitable, Butts said that in reality, wealthier districts with smaller shares of students from low-income families win because their students cost less to educate overall. Often, students in those districts aren’t moving around as much as in urban students, and they experience lower rates of homelessness and trauma. The loss of complexity funding is one reason why urban districts are more frequently turning to referendums to ask voters to approve tax increases that bring in more revenue, he said. Wayne Township has one on the ballot in May.

Weston Young, chief financial manager for IPS, said that the cuts don’t change what the district is still required by law to provide, such as special education services. Rather, he said cuts have to be made broadly — teachers salaries could stagnate, driving teachers from the district, and class sizes could rise.

Young also worries that by using public assistance enrollment as a metric for extra aid — rather than qualification for free- or reduced-price lunch, which the state used until 2015 — Indiana risks underestimating the number of students living in poverty. He said some families might avoid applying for public assistance programs because, for example, they are undocumented.

Butts also said that the data the state relies on to determine complexity funding are far too narrow and don’t include students who qualify for Medicaid or other income-based services that the federal government takes into account for Title I funding.

For his part, Huston said he’s frustrated by school leaders who can’t quantify what their needier students cost them. Without that data, he said, distributing funding equally among districts makes the most sense.

“It’s not a lack of compassion,” Huston said. “It’s an understanding of trying to figure out how do you balance out across a million-plus kids across the state … what is the most appropriate way to do it.”

Once the state Senate offers its draft budget, lawmakers have until mid-April to come to an agreement.

Tags:2019 legislative sessionSchool Funding
At WFYI, our goal is to cover stories that matter to you. Our reporting is rooted in facts. It considers all perspectives and is available to everyone. We don't have paywalls, but we do need support. So if unbiased, trusted journalism is important to you, please join us. Donate now. 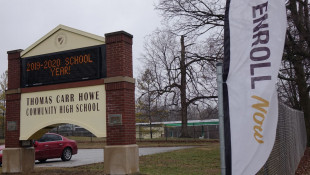 An investigation by the Indiana State Board of Accounts says a quest to maximize profit at two virtual charter schools led its leaders to inappropriately collect more than $68 million in tax dollars by inflating student enrollment numbers for years.
Read More