The Senate Health and Provider Services Committee on Wednesday threw its support behind a bill that would require Indiana physicians to check the state prescription database - called INSPECT- before prescribing powerful drugs, including opioids.

Fourteen states currently require both physicians and pharmacists to check someone's drug history, but Indiana isn't one of them.

The INSPECT database, which contains information about a patient's past prescriptions from all providers, allows doctors and pharmacists to check a patient's drug history with the hopes of preventing over-prescribing and drug-seeking behavior such as doctor shopping.

The state has started integrating INSPECT into electronic health records, reducing a system that took precious minutes to seconds. The change made it easier to check the system, but the practice is still optional.

Holcomb voiced support for a mandatory query of the system in his State of the State address last week, saying the state is "moving forward to require Indiana physicians to use INSPECT before ever issuing an opioid prescription."

If it becomes law, the new requirement to check the system would be rolled out in stages. First, emergency room physicians would be required to check INSPECT before prescribing beginning in 2019, followed by hospital practitioners a year later and finally all other doctors in 2021.

"Early in my career, I had to rely simply on what [patients] told me an honor system, where I took their word for it," said Commissioner Box, herself an OB-GYN. "Today I can look at a patient's record and get a much clearer record of the medications she's taken. But the system is only as good as the number of physicians using it."

But not all testimony was positive. One of Box's predecessors, physician and former state health department head Richard Feldman, said though he applauds the spirit of the idea, he's worried about over-taxing harried family practitioners, especially since the bill requires doctors to query the database before prescribing popular drugs such as Xanax, Atavan and Valium, not just opioids. (Those drugs, known as benzodiazepines, are potentially fatal when taken with painkillers.)

Sen. Liz Brown (R-Fort Wayne) said she worries the three-year rollout is too rapid, and wants to make sure all doctors have integrated INSPECT into their electronic health records before they could be penalized for not using it.

Brown also wondered why dispensers such as pharmacists weren't included in the bill. Dispensers are currently the only practitioners required to take any action regarding INSPECT; the law requires dispensers to upload prescription data into the system, but doesn't require them to check it before dispensing.

"That is certainly something that could follow," said Box, who said mandatory dispenser queries "would be very appropriate. In my past career, a lot of alerts have come from pharmacists."

A similar, less aggressive bill has been put forth by Sen. Jim Merritt (R-Indianapolis). Merritt's legislation would require all practitioners and dispensers to register with the drug monitoring database, as a precursor to a mandatory query.

Patrick Knue, director of the Prescription Drug Monitoring Program Training and Technical Center at Brandeis University, has said mandatory checks - which are required in some other states, such as Indiana's neighbor Kentucky - are the most effective way to get states to use monitoring systems.

Despite the objections, the committee moved the bill unanimously to the Senate floor.

Tags:prescription drug database
Support independent journalism today. You rely on WFYI to stay informed, and we depend on you to make our work possible. Donate to power our nonprofit reporting today. Give now. 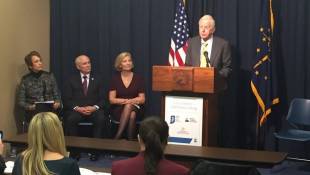