Indiana Manufacturing Has Been On Trump's Mind. What's The State Of The Industry Now?

The manufacturing industry in the state of Indiana has been on President Trump’s mind ever since he won the presidency, but what’s happening to that industry resonates far beyond the White House.

After Trump’s urging, the parent company of air conditioning company Carrier announced in late 2016 it would keep more than 1,000 jobs in Indiana that it intended to move to Mexico.

“Companies are not going to leave the United States anymore without consequences,” Trump said in a speech at the Carrier air conditioning plant in Indianapolis shortly after he was elected in late 2016.

Around the same time, another manufacturing company, Rexnord, also announced plans to close an Indiana factory, putting about 300 people out of work. Trump expressed his anger on Twitter.

Now it’s nearly two years later, and one of those laid-off workers is still struggling to find his footing.

When Brian Bousum lost his job, he was just 12 weeks away from being eligible for his pension. Bousum made $24 per hour as a machinist at the Rexnord plant. Today, he works as a plumber, but earns much less than he did before.

“Back then, we used to joke it was the best job we ever hated,” he says. “I would do anything for that job now. Whenever you work in a factory, it gets monotonous. You wonder if there are better things out there in life. But then when you lose it, you realize that was the better thing.”

Bousum lives with his girlfriend Margaret and their two rescue dogs in a one-story ranch style home in a middle-class neighborhood. His Harley is parked in the garage. He’s also going to school. 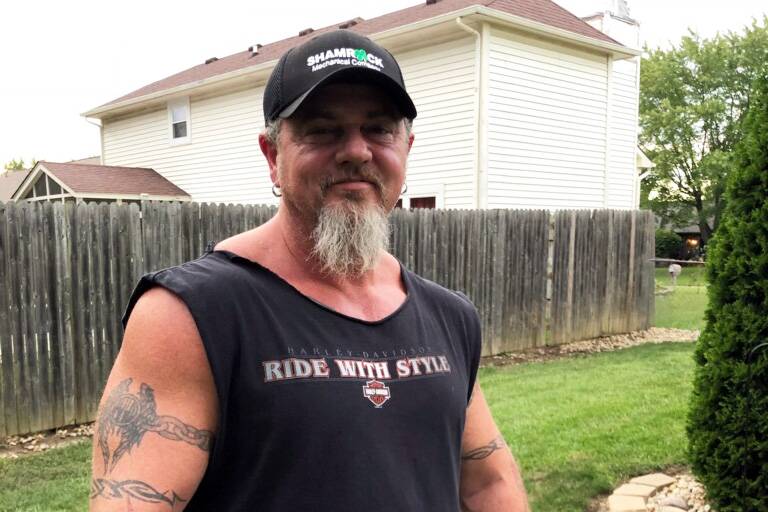 Brian Bousam, 52, a laid-off Rexnord worker. When he lost his job last September, Bousam was 12 weeks away from being eligible for a pension. (Jeremy Hobson/Here & Now)

The story of Rexnord closing this plant was all about the bottom line, Bousum says.

“The value of the stock has become to me the root of all evil,” he says. “They can move to Mexico and make $15 million more.”

And Bousum says he knows the layoffs were not personal at all.

“It was business as usual, and it was just shell shock when they announced it,” he says.

As for his long-term plan now, Bousum says, “I don’t know. You tell me.”

Bousum was a member of United Steelworkers Local 1999 when he worked at Rexnord. The union’s current president, Robert James, says Trump’s words and tweets haven’t made much difference for people like Bousum.

“Trump didn’t do anything to help the Rexnord workers,” James says. “Carrier became a poster child for President Trump. He told the workers what they wanted to hear.”

James says it’s good that at least some Carrier workers kept their jobs, but he’s worried that an automation grant included in a $7 million incentive package could eventually cost more workers their jobs.

“It means workers with a very different skill,” says Hicks. “And that tends to move them from rural to urban places. So it’s not simply that the worker is displaced, but the business realizes it’s not going to acquire the labor force it needs in small town America.”

Both Rexnord and Carrier declined Here & Now’s requests for an interview.

"Whenever you work in a factory, it gets monotonous. You wonder if there are better things out there in life. But then when you lose it, you realize that was the better thing."

Switching gears to a new profession is tough at any age, but it’s been especially difficult for Bousum, who is in his early 50s. The challenges he faces are reflected in the broader trends affecting manufacturing right now.

Experts say the industry is growing, but companies need to retrain current workers to keep up.

“Companies are employing a lot of people. Manufacturing is the largest industry in Indiana by a significant margin,” says Andrew Berger, a senior vice president at the Indiana Manufacturers Association, which represents manufacturing companies. “Our biggest drawback is a lack of workforce. We’ve got about 10 to 15,000 open positions any day in manufacturing alone in Indiana. That’s a skills gap. Companies are looking to hire people in areas where there aren’t enough people.”

With less than two months until the midterm elections, the state of the industry could affect how people like Bousum cast their ballots. Bousum voted for Barack Obama twice and says he voted for Trump because “he was the only one talking about bringing jobs back to America.

“He did save some jobs. He mentioned Rexnord and got on the CEO that made the decision to cut our throats,” Bousum says. “So when candidate Trump brought it to the table, why would I not take a chance? You ask me today do I support President Trump? Absolutely. But ask me again tomorrow.”

Tags:RexnordDonald Trumpmanufacturing
Support independent journalism today. You rely on WFYI to stay informed, and we depend on you to make our work possible. Donate to power our nonprofit reporting today. Give now.