INDIANAPOLIS (AP) — The Indiana Pacers aren't yet taking the Bankers Life name off their arena even though the company's naming-rights deal expired in June.

Team marketing executive Todd Taylor says changes won't be made at the downtown Indianapolis arena until a new sponsorship contract is signed. Carmel-based CNO Financial Group announced last year it wasn't renewing the naming-rights contract that it held since the arena opened as Conseco Fieldhouse in 1999.

Taylor tells the Indianapolis Business Journal that the Pacers want to reach a new sponsorship agreement before a $360 million arena renovation begins next summer. Taylor said several groups have expressed interest, but a deal couldn't be reached before the NBA's regular season began this past week.

CNO Financial paid about $2 million a year for the naming rights.

Tags:Bankers Life FieldhouseIndiana PacersCNO Financial Group
Support independent journalism today. You rely on WFYI to stay informed, and we depend on you to make our work possible. Donate to power our nonprofit reporting today. Give now. 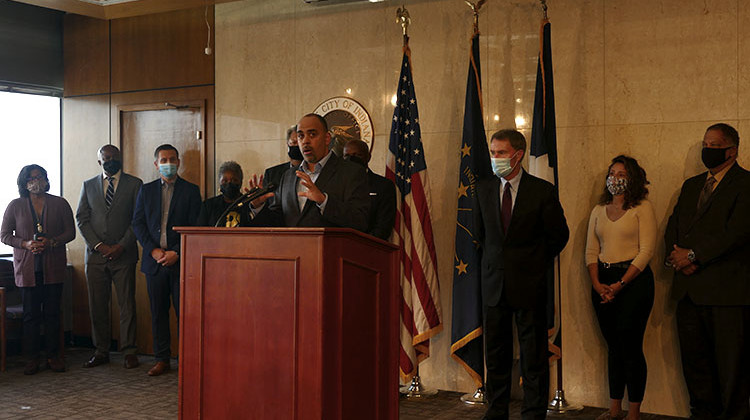 Indianapolis will use over $150 million from the American Rescue Plan to boost public safety. The latest part of the plan is a gun violence reduction strategy led by the city Office of Public Health and Safety and the National Institute for Criminal Justice Reform.
Read More