A group of scientists led by an Indiana University physicist has resulted in a detection of a new kind of subatomic particle—a so-called “tetraquark.”

Quarks are among the teeniest, tiniest building blocks of matter. When quarks combine, they create protons, neutrons and other particles which make up molecules, and so on.

“Quarks are really truly incredibly tiny, we don’t even know how small they are,” says Fermilab Senior Physicist Don Lincoln, who also worked on the project. “Light only allows you to see down to a certain size, and these are well down below that.”

Most of the time quarks group together in twos and threes, but this newest discovery has FOUR quarks.

And just like starbursts, quarks come in different so-called “flavors”: Up, Down, Charmed, Strange, Top and Bottom. Each flavor has a corresponding antimatter counterpart.

IU professor Daria Zieminska was the lead on a team that studied particularly heavy particles at Fermilab, near Chicago. The particles only exist for almost unimaginably short periods of time—fractions and fractions of a second. They’re created when scientists slam an antimatter proton and proton together using a Fermilab particle accelerator.

All the energy created during the collision turns the energy into mass, which is when the tetraquark formed, then promptly decayed. The force that creates the particles is, in Lincoln’s words, the “strongest force we’ve ever discovered.”

Zieminska and her colleagues were able to posit the existence of the tetraquark by examining the decayed particles and working backwards. She was among the first two people to discover this special tetraquark, and says the results contribute to understanding of “quark matter,” which was present during the Big Bang.

“If we understand how quarks interact we will understand better how the early universe evolved. And I think, what can be more fundamental than that?” she asks.

She says the more scientists know about the forces that hold particles such as tetraquarks together, the better they can understand the forces that created the universe.

As far as practical applications go, Zieminska says, “not to worry about it.”

“If people ask about what is the practical meaning…there is no meaning,” she says. “It’s like there’s no practical application of art of music. You cannot spread it on your bread!  It’s only the satisfaction is that we understand the universe.”

Although rare, tetraquarks have been found before. However, this is the first that has a combination of four different “flavors” of quarks. Tetraquarks found before have all contained pairs of the same kinds of quarks.

“The fact they combined, four of them, to make a particle, is really fundamental,” says Zieminska.

“The mechanism that’s making it seems to be different,” says Lincoln.

A pentaquark, or a five quark particle, was observed last year by scientists working with the Large Hadron Collider in Geneva, Switzerland.

Tags:Indiana Universitysubatomic particlestetraquarkquarksDaria ZieminskaFermilab
At WFYI, our goal is to cover stories that matter to you. Our reporting is rooted in facts. It considers all perspectives and is available to everyone. We don't have paywalls, but we do need support. So if unbiased, trusted journalism is important to you, please join us. Donate now. 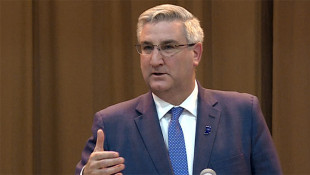 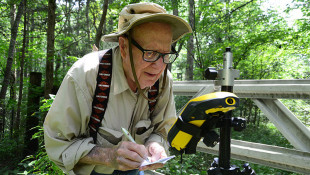 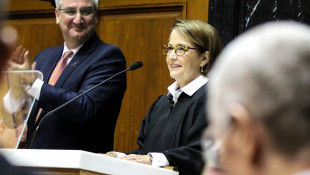 Indiana Chief Justice Loretta Rush issued a call to arms for everyone involved in the states justice system in her annual State of the Judiciary Address Wednesday.
Read More