INDIANAPOLIS -- Indiana’s U.S. Senators are split on whether their chamber should vote on President Obama’s nominee for the Supreme Court vacancy.

Merrick Garland, chief judge of the Washington D.C. Circuit Court of Appeals, was confirmed by the Senate in 1997, including an affirmative vote from Republican Sen. Dan Coats.  And Coats in recent weeks said Obama’s nominee should get a hearing.  But in a statement, the Hoosier Senator now says the next president should fill the vacancy.

Coats says with the nomination coming in the middle of what he calls a “highly contentious presidential election process,” the people should have a voice in what Coats believes is a decision that will fundamentally alter the Supreme Court’s direction.

Coats’ Democratic counterpart Sen. Joe Donnelly says the Senate was elected to do a job that includes considering and voting on Supreme Court nominees, and that senators should do that job.  Speaking specifically about Garland, Donnelly says only that he’ll carefully review and consider the judge’s qualifications.

Tags:Dan CoatsJoe DonnellyBarack ObamaUnited States Supreme CourtMerrick GarlandSupreme Court nominee
Support independent journalism today. You rely on WFYI to stay informed, and we depend on you to make our work possible. Donate to power our nonprofit reporting today. Give now. 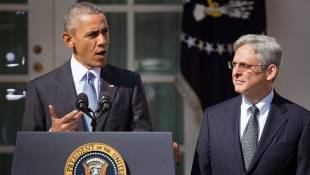 Merrick Garland Has A Reputation Of Collegiality, Record Of Republican Support

Merrick Garland, a judge with 13 years' experience, was not the first choice of liberals. But President Obama hopes his ability to win over conservatives will extend to the Supreme Court.