The Terre Haute campus is largely tobacco free under a policy that took effect in 2009, although the school has some designated outdoor smoking areas and it allows people to smoke in private vehicles.

But a draft policy that would ban vaping will be presented to ISU's trustees this week. A final policy recommendation will be submitted for May's trustees' meeting. If it’s adopted, the vaping ban would be implemented on July 1, the Tribune-Star reported.

The school’s trustees could suggest changes prior to adoption of any final policy.

The current draft policy would prohibit electronic smoking devices, hookah, smoking and tobacco product use on property owned, operated or leased by the university.

Their use would still be permitted in “the enclosed cabin” of privately owned vehicles, while designated campus smoking areas “will be gradually phased out in a manner determined by the administration,” the draft policy states. No timeline is included for that phaseout.

Tags:Indiana State Universityvaping
Support independent journalism today. You rely on WFYI to stay informed, and we depend on you to make our work possible. Donate to power our nonprofit reporting today. Give now. 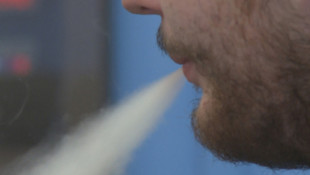 Two Indiana agencies have partnered to develop statewide trainings to help educate schools and parents on the dangers of vaping.