The Herald Times reports that the Eskenazi Museum of Art will close beginning in May 2017 with plans to reopen in the spring of 2020. The university's board of trustees approved the project earlier this month.

Museum director David Brenneman says the museum is still working on final designs for the renovation, which includes the museum taking over the space currently used for the Fine Arts Library. The building's climate controls system will also be updated and new classroom space will be added.

Brenneman says expansion isn't part of the project thus far, but that it's a future possibility.

Brenneman previously led planning and execution of the High Museum of Art in Atlanta, where he was director of collections and exhibitions.

Tags:Indiana UniversityEskenazi Museum of Art
At WFYI, our goal is to cover stories that matter to you. Our reporting is rooted in facts. It considers all perspectives and is available to everyone. We don't have paywalls, but we do need support. So if unbiased, trusted journalism is important to you, please join us. Donate now. 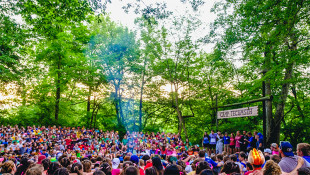 Camp Tecumseh YMCA officials said the 660-acre riverside camp will be vacant this summer for the first time since it opened in 1924 because they didn't believe theyd be able to guarantee campers' safety.
Read More