Indiana University officials plan to toast the school’s bicentennial later this month with the dedication of a new supercomputer, the inaugural chiming of a rare collection of bells and a speech by Academy Award-winning actress Viola Davis.

The Herald Times reports the Day of Commemoration events are scheduled for Jan. 20. It represents the 200th anniversary of Indiana Gov. Jonathan Jennings’ signing of a bill that led to the school's 1820 founding.

All three events are part of a day-long slate of activities to mark the date, including the unveiling of a giant ground sloth’s skeleton replica once housed on the Bloomington campus.

Tags:Indiana University
At WFYI, our goal is to cover stories that matter to you. Our reporting is rooted in facts. It considers all perspectives and is available to everyone. We don't have paywalls, but we do need support. So if unbiased, trusted journalism is important to you, please join us. Donate now. 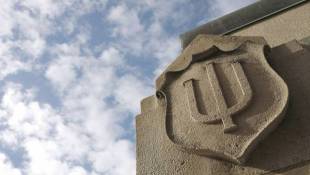 Indiana will promote longtime athletic department administrator Scott Dolson to the top job of athletic director. He will replace Fred Glass, who is retiring at the end of this year, if Indiana's board of trustees approve the move in April.
Read More