INDIANAPOLIS (AP) — The number of counties at or approaching high risk for community spread of COVID-19 is surging as an especially contagious coronavirus variant spreads in Indiana, where nearly half of the eligible population remains unvaccinated.

On Monday, 43 counties were in Indiana’s second-riskiest category for the spread of the virus, up from 29 counties a week earlier, according to the most recent update posted Wednesday on the state’s coronavirus dashboard.

READ MORE: Delta Is Causing A Surge In New COVID Cases In Indiana. Here’s What You Need To Know

The number of counties in the highest-risk red category, which indicates very high community spread, jumped to eight after Posey County became the first in more than six months to receive the rating last week.

Forty counties are listed as moderate-risk, or yellow. Eastern Indiana’s Randolph County is the only one that is blue — low risk.

The county ratings have gone downhill in a matter of weeks. On June 26, 86 of Indiana's 92 counties were in the blue category, and six were in yellow. No counties were listed in the orange or red categories.

The state's weekly dashboard update also indicated more than three times as many hospitalizations compared to late June when patient counts were below 400 — the lowest since the start of the pandemic.

Nearly 1,300 Hoosiers were hospitalized with COVID-19 as of Tuesday, according to the most recent data released by the state health department. Of those, 305 were in intensive care, the most since Feb. 5.

Indiana recorded 2,507 new cases of the coronavirus Tuesday, up from 1,725 one week ago, and marking the fourth straight weekday over 2,000 reported cases of the virus.

Tests conducted this month on a sample of Indiana’s cases showed that as of Wednesday, 82% of them were the delta variant, the dashboard showed.

Indiana’s top health officials have warned that the highly contagious delta variant will continue to spread if vaccination rates do not improve. As of Tuesday, 51% of Indiana’s eligible population — those age 12 and up — was fully vaccinated, according to the state health department.

Republican Gov. Eric Holcomb ended a statewide mask requirement in May, when virus spread had tapered and hospitalizations were on the decline. The governor said last month that he’s concerned about the delta variant, but maintained he would leave decisions about mask requirements in schools up to local officials.

School districts across Indiana are reassessing their back-to-school plans, with dozens updating their guidance to require masks as the next academic year begins. That includes several Indianapolis-area schools, which said earlier this summer they would let parents decide if their child needs to wear a mask in class.

Indianapolis Public Schools, the state’s largest district, announced last month it would require masks for all staff and students, regardless of vaccination status. District officials at the nearby Wayne Township Schools district tightened its policy for mask wearing the night before classes started.

After one week of in-person instruction, Southeastern Indiana’s Scott County School District 1 on Tuesday was among the first in the state to announce it would shift to virtual learning for two weeks after an “extremely high rate" of students were placed in coronavirus quarantine. District leadership said they hope to return to in-person learning by Aug. 23.

A week earlier, East Central Indiana's Anderson Community Schools quarantined more than 100 students due to COVID-19. The district — which is “mask optional” this year — implemented a temporary mask mandate through Aug. 20 in response to the spike. 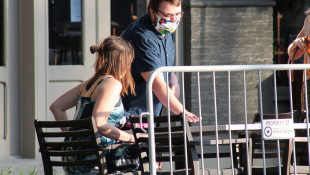 Delta Is Causing A Surge In New COVID Cases In Indiana. Here’s What You Need To Know

The COVID-19 delta variant accounts for more than 80 percent of sampled positive cases in Indiana. State health officials have pointed to the variant as the main driver of Indiana’s recent climb in new cases and hospitalizations.