On Day One of RFRA, Groups Vow Push for Expanded Civil Rights

The "Religious Freedom Restoration Act" -- RFRA -- allows people to use their religious beliefs as a legal defense against certain government regulations.  After a wide-ranging outcry about the legislation, that included business leaders, churches and civil rights groups, GOP lawmakers quickly developed a follow-up bill. While it attempts to clarify that the law cannot be used to to deny services, goods, housing or employment to anyone based on sexual orientation or gender identity, many have lingering concerns about the law's effect.

At a rally Wednesday, activist Rick Sutton vowed to return to the Statehouse next session to urge lawmakers to finish the work of unraveling RFRA’s damage by codifying civil rights protections for LGBT Hoosiers.

Annette Gross is the state coordinator for Indiana’s PFLAG chapters – that’s Parents, Families and Friends of Lesbians and Gays.  She said PFLAG and others will form a coalition that will sign up voters, aiming to elect legislators willing to support the LGBT community:

“We will share our stories and share the humanity of our LGBT loved ones with our fellow Hoosiers," Gross said.

Legislative leaders say they expect a debate on the issue next session.

Tags:Religious Freedom Restoration ActRFRALGBTcivil rightssame-sex marriage
Support independent journalism today. You rely on WFYI to stay informed, and we depend on you to make our work possible. Donate to power our nonprofit reporting today. Give now. 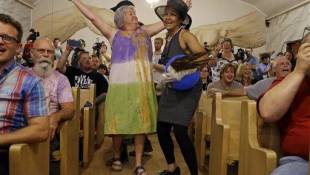 Pot or No Pot, The Show Goes On at Indy's Church of Cannabis

At a church building on Indianapolis' east side, the state's new religious freedom law is getting a different kind of acknowledgment - as the First Church of Cannabis prepares for its inaugural ceremony. Church founder Bill Levin created the church as a possible test case for the new law.